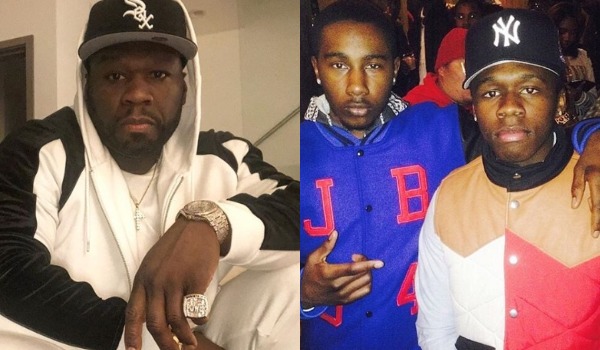 That could be a word to describe a message that 50 Cent recently posted about his son Marquise Jackson.

Not too long ago, a photo surfaced of Marquise standing with a young man named Kyle, who’s said to be the son of former Queens, New York, drug lord Kenneth “Supreme” McGriff.

In 2007, McGriff received a life sentence for his alleged crimes, and since he’s from the same neighborhood as 50, their history and beef run deep. Supreme also had close ties with 50’s longtime enemies Ja Rule and Irv Gotti.

In fact, it’s been rumored that McGriff had 50 shot several times in 2000, a persistent and well-documented claim over the years since then.

“If both these little n—– got hit by a bus, I wouldn’t have a bad day,” wrote 50 underneath the photo of Marquise and Kyle.

Now, some may ask why Marquise would stand with McGriff’s son in the first place.

That’s because he and his dad haven’t gotten along for many years. In the past, Fif  insulted Marquise on social media, called his mother all kinds of nasty names during exchanges and even threatened to shoot him back in 2015, which he caught backlash for.

But this time, the opinions were split about what 50 wrote under Marquise and Kyle’s photo.

“He took a pic with the dude’s son who got him shot 9 times,” someone wrote.

“I’m from Queens,” wrote another. “This is the ultimate betrayal. [Kyle’s] father might have something to [do] with 50 Cent’s mom’s death.”

“So I would speak to my child offline, because that still is a thing and explain the history,” another person suggested. “But I’m not wishing death on my child because of my faults as a parent.”

Marquise has yet to comment on his dad’s message.