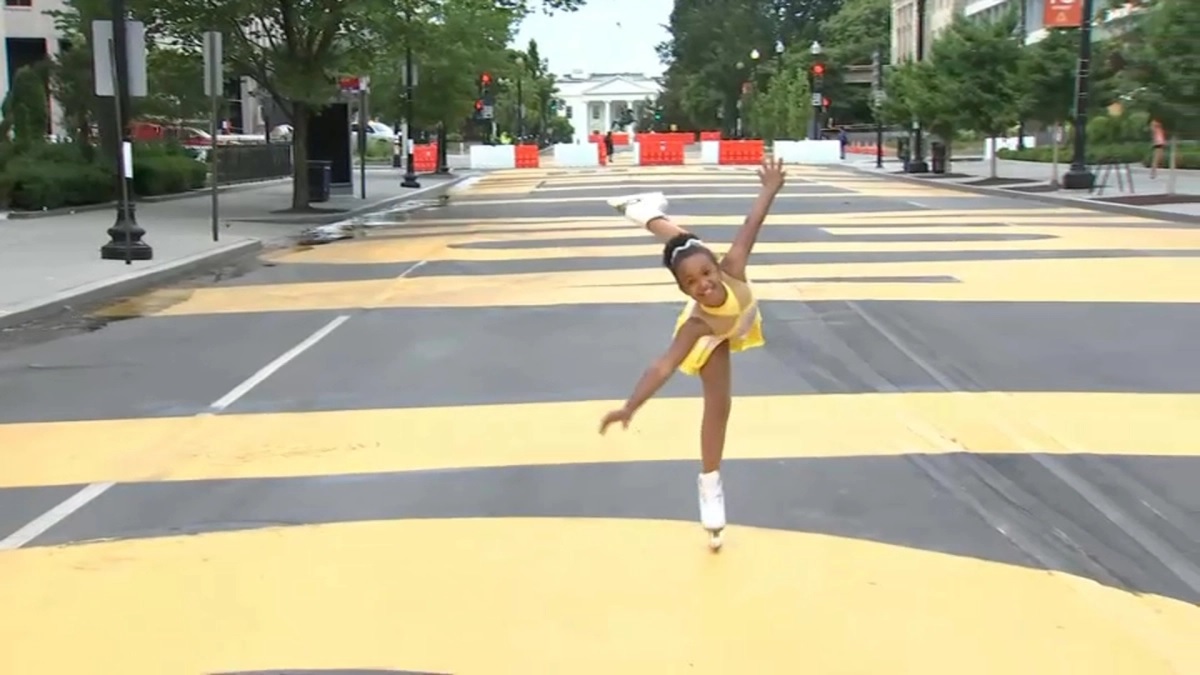 A 9-year-old girl is using her incredible talent as a figure skater to promote the Black Lives Matter movement.

Kaitlyn Saunders, a fourth-grader, took to Black Lives Matter Plaza in her hometown of Washington D.C. and performed a routine to Andra Day’s “Rise Up.”

“I felt like I was floating and that it was limitless,” she told Good Morning America. “Being able to do that, it made me feel strong and powerful.”

Saunders also made sure to dress for the occasion, donning a yellow and white leotard matching the large yellow letters that spell out “Black Lives Matter” on the street directly leading to the White House. The plaza has been renamed after the deaths of George Floyd, Breonna Taylor and more who have died in recent weeks at the hands of police.

According to Kaitlyn’s mom, Katrice Saunders, her daughter has learned about the BLM movement over the past few years, and since Black Lives Matter Plaza was renamed, has wanted to skate across it.

“She had the idea she wanted to go down there and skate on Black Lives Matter Plaza,” Katrice Saunders said. “She asked to do that so we went down there really early in the morning.”

Kaitlyn says Day’s song inspired her and created the choreography to her skate routing herself.

“I listened to the music a couple of times and thought of moves that could go with the music,” she said. “And then I saved the moves in my head so when it was time to skate I just did what I thought in my head.”

Since posting her routine on her Instagram account, which now has north of 340,000 views, Kaitlyn says she’s received a lot of positive feedback and wants the positive vibes to spread to others.

“It’s really nice,” she said. “I wish I could give the positive messages to other people who aren’t doing so well.”

A week ago, the D.C.’s Mayor Bowser @mayor_bowser had the words Black Lives Matter painted on 16th street in front of the White House. She said her hope is that we can all speak up and protect each other. I wanted to share my hope for the future. At 5:30am while the streets were still empty, my parents and I went down to Black Lives Matter Plaza to record this video. I decided to skate to one of my favorite songs, “Rise Up” by Andra Day @andradaymusic . I skated to the song based on what I was feeling. . The aerial views were shot using an @insta360 camera. . Thanks to Vernon Davis @thedavisworldtour for lending his camera and talents. . . #figureskatersforfreedom #figureskatersforjustice #blacklivesmatter #blm #riseuptogether #positivevibes #inspire #georgefloyd #justiceforgeorgefloyd #blackgirlmagic #breonnataylor #ahmaudarbery #justiceforahmaud #endracism #figureskating #figureskater #figureskate #figureskater #figureskaters #figureskatinglife #picskates #inline #inlineskating #inlineskate #inlineskater #rollerblading #rollerskating #inlineskates #amplifymelanatedskaters #diversifyice @official_picskate #picskates . . .