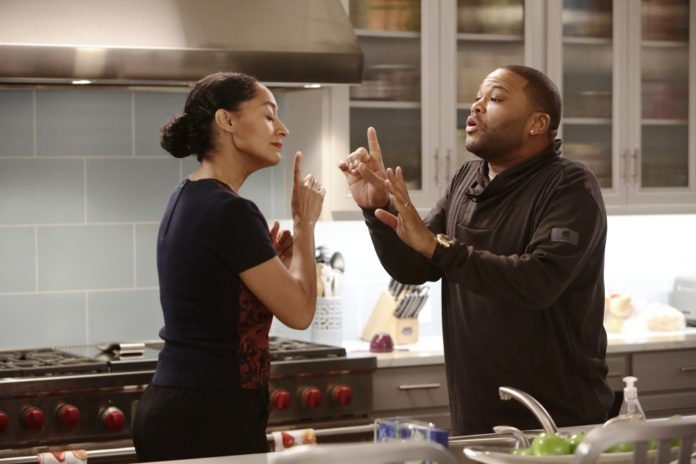 ABC has pulled an episode of the show Black-ish due to creative differences. According to Shadow and Act, the episode titled, “Please, Baby Please,” has been shelved indefinitely.

The network made a scheduling announcement a few days earlier about the popular comedy created by Kenya Barris, stating that a rerun would air instead.

“The episode features Anthony Anderson’s patriarch Dre caring for his infant son on the night of an intense thunderstorm that keeps the whole household awake. Dre attempts to read the baby a bedtime story, but abandons that plan when the baby continues to cry. He instead improvises a bedtime story that, over the course of the episode, conveys many of Dre’s concerns about the current state of the country. The episode covers multiple political and social issues. In one scene, Dre and oldest son Junior (Marcus Scribner) argue over the rights of athletes to kneel during the performance of the national anthem at football games.”

Black-ish has distinguished itself as a comedy series unafraid to tackle hot-button issues like police brutality, slavery, the election of Donald Trump, and postpartum depression.

After news of the provocative episode’s cancellation broke an ABC spokesperson released a statement:

“One of the things that has always made ‘Black-ish’ so special is how it deftly examines delicate social issues in a way that simultaneously entertains and educates. However, on this episode there were creative differences we were unable to resolve,” an ABC spokesperson told Variety.

“Given our creative differences, neither ABC nor I were happy with the direction of the episode and mutually agreed not to air it. Black-ish is a show that has spoken to all different types of people and brought them closer as a community and I’m so proud of the series,” said Barris.

It’s not about black and white

ABC’s hit comedy features an African-American family, but Kenya Barris has stated in the past that he isn’t interested in profiling who sees it.

“It’s ridiculous: Everything is about black and white,” he said. “It doesn’t matter who’s watching our show. What counts is, they’re watching it.

“I would be so happy when ‘diversity’ is not a word,” he continued on Thursday at the Television Critics Association summer conference during a panel discussion with the show’s producers and all-black cast. “These are amazing, talented actors who are giving it their all. We’re so tired of talking about diversity at every panel. The question of diversity clouds the conversation.”

Even so, Barris disclosed that roughly one-fourth of the audience is black, with much of the rest white-ish.