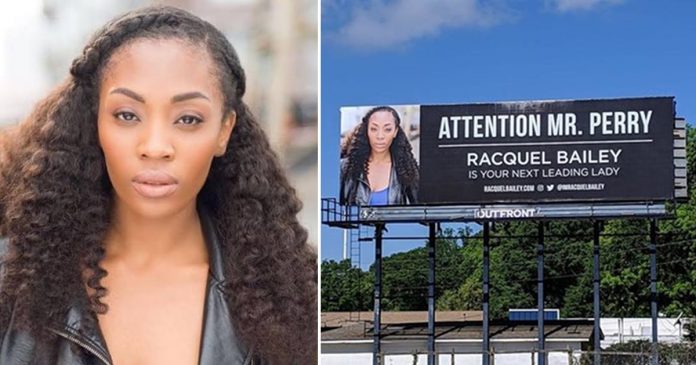 The actress who became the talk of 2019 for buying billboard space to get Tyler Perry’s attention has landed a role on Tyler Perry’s Sistas. Her episode will air Wednesday at 9 p.m. ET on BET.

The Grio reports that Racquel Bailey, who paid for billboards promoting her talents to Perry, will now play Officer Rayah, who is shown in a promo about to arrest another character, Zac. The only clue she gave about her character’s intentions with Zac was that perhaps at one point, Officer Rayah and Zac were romantically linked. As she told CNN, “She gives him a run for his money and she doesn’t play at all.”

The drama is heating up on @SistasOnBET! Watch an all-new episode next Wednesday 9/8c. #SistasOnBET pic.twitter.com/zXV8cqCyak

Interestingly enough, Perry initially didn’t seem to go for Bailey’s eye-catching tactic, a tactic that she had tried seven years ago, she told CNN last year. When Bailey made the news last year, Perry tweeted for fans not to go that route, writing, “This is not the way to get my attention if you’re looking for a role in one of my shows.”

Auhhh…. soooooo…… here’s the deal. This is not the way to get my attention if you’re looking for a role in one of my shows. Please DON’T DO THIS, SAVE YOUR MONEY!! This is the third time that someone has done this.. continued: https://t.co/GC22lmohif pic.twitter.com/9lYYdQXNl5

“This is the third time that someone has done this. PLEASE STOP! To audition is FREE!! I’m sure you can use that money for a better purpose,” he wrote. “I love that you want to work with me, and I love that you invest in yourself. But when you do things like this it puts my team on high alert and makes me look at you sideways. I know the message that you want to send is a positive one, but this comes across as the opposite.”

Auhhh…. soooooo…… here’s the deal. This is not the way to get my attention if you’re looking for a role in one of…

But it still seems like it worked, since last year, CNN reported that a few days after Bailey’s billboards were posted, she was contacted by Perry’s team and flew to Atlanta from her home of New Jersey to audition. According to The Grio, Bailey did audition for several roles until she landed her part as Officer Rayah. But, she said, she was taken seriously as an actress, and not simply as “the billboard girl.”

She also told CNN at that time that she took her unique approach to getting noticed to show her children that going after goals is important.

“I wanted my children to see me go after my dreams at any cost,” she said. “Because one day they’ll have to chase a dream, and I’ll be able to say, ‘You can do it because Mommy did.'”