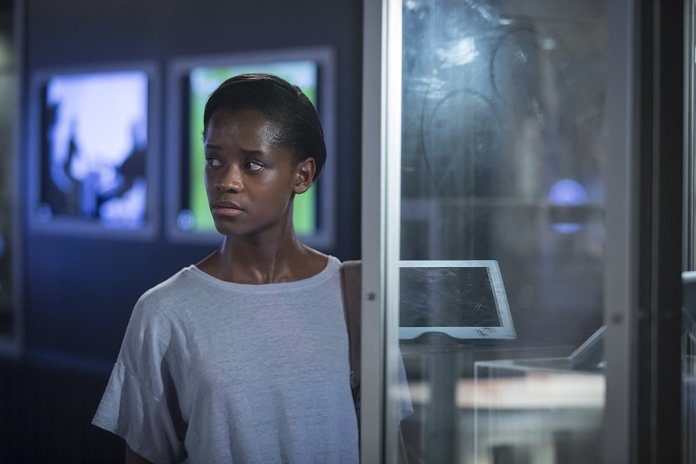 Black Mirror does a masterful job of one thing: reminding its viewers that the post-racial future we’re fighting for isn’t a guarantee. In fact, the ways in which marginalized people are suffering have the potential to be more extreme and horrible through technological advances.

In the season 4 finale titled “Black Museum,” the Netflix anthology series creator Charlie Brooker imagines a society where Black women still carry the burden of responsibility to right the wrongs of injustice at the expense of their own detriment.

At the start of the episode, Nish (Letitia Wright) seemingly arrives at Rolo Haynes’ (Douglas Hodge) deserted exhibit of tech-induced crimes—including a teddy bear inhabited by a dead woman’s trapped conscious, and other artifacts of horror from previous episodes of the series like “Arkangel” and “White Bear”—only to kill time until her vehicle recharges.

In the meantime, Haynes gives Nish an impromptu tour of tech-gone-wrong tales until they reach the main attraction, where Haynes recounts the electric chair torture of a Black inmate.

Unbeknownst to him, that inmate was Nish’s father, Clayton, who was wrongfully accused of killing a white woman named Denise Stockley.

It isn’t until the final 11 minutes where Nish reveals her plan to exact justice. She details the countless protests to clear her father’s name, the DNA tampering we can only hope was brought up in trial, and sadly her mother’s suicide by “a bottle of pills and a bottle of vodka” because her husband’s half-living, half-dead state was just too much to handle.

As with most Black deaths, people “just moved on to the next viral miscarriage of justice they can hang a hashtag off of,” leaving Nish responsible for seeking justice not only for her dad’s crippling suffering but also her mother’s.

But just as Haynes skipped the parts of Clayton’s story and the protests died down, Black women and the psychological, emotional and physical trauma we endure in these times are also forgotten. When Black men are carted off to jail or lowered into six-feet ditches, the women are left with the duty to fight, find a way to heal and move forward.

And for so many, that’s entirely impossible.

Black women who bear witness to the death and unlawfulness in our communities are often the ones to stand up and fight against it. But should we have to? And when does the cycle of pain end?

This episode forces the viewer to examine the real-life consequences Black women face from carrying the weight of scenarios like these every day (and really since forever). It’s hard not to think of Erica Garner and Venida Browder, two women who fiercely fought injustice in their late father and son’s names, respectively, and later died from heart attacks.

As Nish stood in her mother’s place, she received closure and happiness, an ending Bossip’s David Dennis, Jr. states is one we deserve. And he’s right. But until then, Black women must stand in the place of Garner, Browder and the other women who couldn’t carry on to finish.

In doing so, Black women continue on as the embodiment of Nish’s final words as she mercy kills Haynes and her father: “Always on, always suffering.”