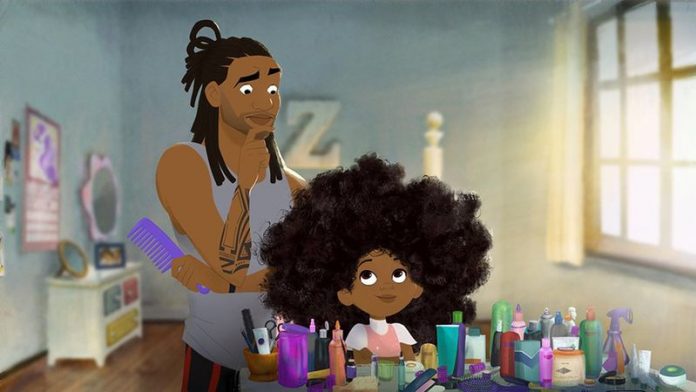 This week Black Twitter found itself giving the Academy the side-eye as the nominations for the 92nd annual Academy Awards were announced and it quickly became clear that barely anybody Black had made the cut.

“Hair Love,” which has an accompanying picture book that became a New York Times bestseller, was released this summer in theaters with “The Angry Birds Movie 2,” and came out in December 2019 on social platforms. The film has received more than 10.8 million views on YouTube alone.

#HairLove is live! It’s an animated short film about an African American father learning how to do his daughters hair for the first time. Written & Directed by me, co-directed by @BruceAlmighteee @Mr_Scribbles & stars @IssaRae. @SonyAnimation #HairLove pic.twitter.com/RRlh2Ncol1

The academy receives a lot of (arguably, often deserved) flak for its many nomination snubs, but it got this one right.

In the film, the little girl, who we know as Zuri, has a palpable excitement for a marked day on her calendar. “Is it picture day?” I initially wondered, since a Thursday was the denoted day. Zuri slides on an outfit already laid out, then approaches her bathroom sink with a wide-tooth comb in hand, ready to tackle the full head of hair we soon see is hidden underneath her bonnet.

She pulls up her favorite hair influencer on a video streaming website and swipes through the looks until she finds one satisfying for the occasion. When she does, we’re taken to a flashback of a woman, presumably Zuri’s mother, doing the child’s hair in the style she just eyed.

“It just took a little bit of work, and a whole lot of love,” the mother, voiced by actress Issa Rae, says.

Zuri attempts and fails miserably, shocking her father to the point of having him drop a basket full of laundry to the ground. After his own multiple attempts and failures, Zuri’s dad tries to resolve the issue by shoving a red beanie on top of her untamed curls. She runs out of the room in tears after she sees how she looks.

Hair is sacred for little black girls: It’s a bonding experience laced with rites of passages typically passed down through our mothers; the memories we create in those bonds make the perfect content to easily connect with other black women and to swap stories with our girlfriends.

Black men — our fathers, brothers, uncles — don’t usually get to partake in this experience by default, for they too have equally special rituals among themselves within the walls of the black barbershop.

Naturally, the roles of black mothers and fathers have been siloed when it comes to caring for their sons’ and daughters’ hair. In nuclear black families — mom, dad, son, daughter — rarely do these roles cross. In part for gender roles, but also in part for the sacredness to which each pertains.

In a society where there are many stereotypes about black men as fathers, Zuri’s dad offers a refreshing take.

“Hair Love” is not a story about a little black girl falling in love with her natural hair — her mother has already fostered that — but of a black father displaying his love for his daughter through doing her hair in the midst of his own intimidation and ignorance.