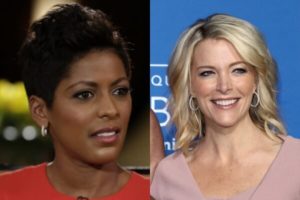 It’s been nearly two weeks since “Megyn Kelly Today” debuted on NBC and the numbers aren’t looking good. A New York Times reporter tweeted Tuesday, Oct. 10 that her ratings for the 9 a.m. hour of the “Today Show” are starting to tank. John Koblin reported viewership is down 24 percent from last year when Tamron Hall was hosting on the hour, which used to be “Today’s Take.”

And the news gets worse.

After averaging 2.5 million during its premiere week, “Megyn Kelly Today” viewership has dropped by 13 percent. Plus, there have been declines in the highly-coveted 25-54 demographic compared to when Hall was on in those same periods.

“Not only are ratings plummeting since Megyn Kelly joined the ‘Today’ franchise,” a source claimed to Page Six Tuesday, Oct. 10. “But the numbers show Kelly’s lead-in has also affected Kathie Lee [Gifford] and Hoda Kotb’s show, which follows straight afterwards,” a source said. “They’ve taken a huge hit with Megyn as their lead-in.”