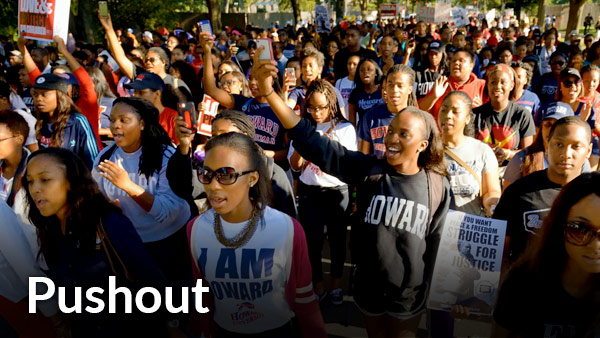 A new documentary, PUSHOUT: The Criminalization of Black Girls in Schools, debuting on PBS March 16, exposes the alarming numbers of African-American girls facing unfair and inequitable treatment in schools across the country and outlines initiatives to help them cope and heal.

PUSHOUT is based on two books by Dr. Monique W. Morris, social justice scholar and founder and president of the National Black Women’s Justice Institute (NBWJI),  PUSHOUT: The Criminalization of Black Girls in Schools and Sing a Rhythm, Dance a Blues.

The documentary exposes a new trend: African-American girls are the fastest-growing population in the juvenile justice system and the only group of girls disproportionately experiencing harsh discipline at every educational level.

It features heart-wrenching stories from girls ages seven to 19 from across the country as they narrate the personal challenges they have encountered in their learning environments and beyond, including the testimony of 12-year-old Samaya, who was dragged out of class – and out of her school building – at age seven by her teacher, and left outside to wander the streets for hours before her parents were notified.

The documentary also offers insights from noted experts who have worked in social justice, gender equality and educational equity, and explores critical interventions that have been effective in interrupting criminalization in schools.

Since the fall the film has been screened in nearly 100 communities across the U.S. Policymakers at the federal, state and local levels have responded favorably to it as a tool to raise awareness about criminalization of youth in schools, and some school district leaders are pursuing and developing policies to shift outcomes. The Ending PUSHOUT Act of 2019, a federal bill introduced last December by Representatives Ayanna Pressley (D-MA), Ilhan Omar (D-MN), and Bonnie Watson Coleman (D-NJ), was inspired by the film.