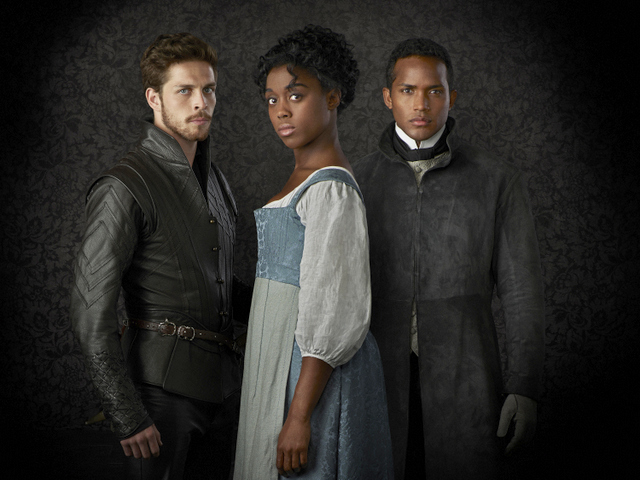 In the wake of the breakout success of Jordan Peele’s film “Get Out” starring British actor Daniel Kaluuya, Samuel L. Jackson found himself in the midst of controversy because of remarks he made regarding the actor’s nationality. He opined about the apparent influx of Black British actors in American productions over the past few years in roles that he implied Black American actors were capable of undertaking.

Jackson got serious pushback and eventually retreated somewhat from his original position. Well, it seems even super producer Shonda Rhimes loves the Brits. On May 29th, her summer series “Still Star Crossed” will premiere on ABC. Starring newcomers Lashana Lynch, Sterling Sulieman, Ebonee Noel, Wade Briggs and Torrance Coombs, the show not only features actors of color, it is also a period drama.

The show picks up the story of the Prince of Verona, and the warring houses of the Capulets and Montagues in the wake of the infamous teen suicides of Romeo and Juliet, the original star crossed lovers. Their deaths have intensified the hatred and violence between the Montagues and Capulets.

Lynch, who is British-Caribbean and is best known for her role in the teen sports drama “Fast Girls,” stars as Rosaline, a Capulet. Lynch describes Rosaline to the AFRO as, “Very feisty, very bold, very not of her time actually. She’s fiery, she speaks her mind, she’s a feminist she’s forthright and at that time for a woman that’s just unheard of. She does a lot to try and stay in line but she’s also contested with her lover which means she’ll have to go against the grain to do what’s right.”

Tough though Rosaline might be, she is still a subject of Prince Escalus. He is also the man she has been in love with since childhood. It’s obvious he’s into her as well. As William Shakespeare wrote in A Midsummer’s Night Dream “The course of true love never did run smooth.”

Prince Escalus has to put country before himself. The prince, played by California born, Hawaii raised Sulieman (“Pretty Little Liars,” “The Vampire Diaries,” “All My Children”), orders Rosaline to marry Benvolio of the House of Montague in order to prevent war from breaking out. Not only does Rosaline loathe Benvolio (Briggs), she is in turmoil over leaving her naive little sister Livia (Noel) in the Capulet household with the caustic Lady Capulet.

A sweeping saga of power and political intrigue as well as steamy romance, “Still Star Crossed” was shot wholly on location in Spain. Lynch explains, “The bulk of the filming was in a city called Caceres, just by the border of Portugal and then we went Salamanca a place called Placencia and a little bit in Madrid. We were literally all over Spain. Everything was shot on location. There were no sets whatsoever. It was all on location.”

Born and raised in London’s West End, “Not far from Notting Hill”, she had previously been to Barcelona. However, she was still impressed by all that Spain had to offer. Bowled over by its beauty and she describes many of the locations in which they filmed as, “All really rural and still have their brick work. They are very old cities, very classical and untouched which was beautiful to shoot in.”

Asked her point of view of the Sam Jackson controversy as a British actor who is herself in a leading role in an American production she used measured words, “If we’re all talented and we’re all trying to strive for the same thing, hopefully we’ll get the roles and we’ll get the career that we desire.” She also brought up a point first introduced by more established British actors Thandie Newton (“Beloved,” “Westworld”) and David Oyelowo (“Selma,” “The Butler”). “There are certain things that we would love to do, like a period drama for example that we wouldn’t be cast for [in Britain]. It does mean there are a few more doors open. It’s a bigger country, there are a lot more roles on TV. You have people like Shonda Rhimes for example who are completely open and they’re ready to cast a newcomer. I’m a newcomer. Someone of the same descent as me understands that I’m new, I’m fresh and I’m hopefully ready to take on a certain role. In terms of what Samuel Jackson said, I mean that’s his opinion. I disagree”