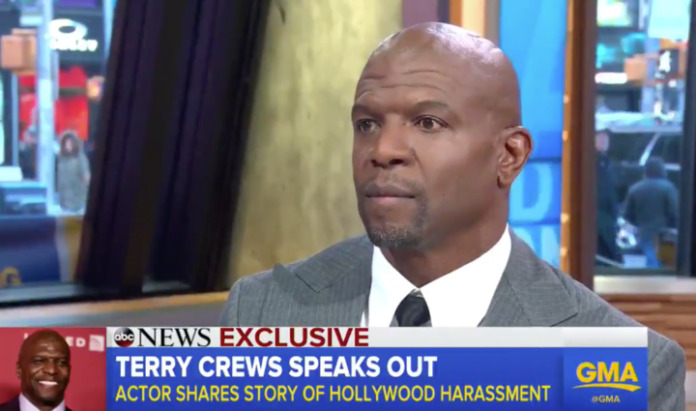 Actor Terry Crews has publicly called out the Hollywood executive he says sexually assaulted him at a party while courageously recalling the harrowing experience on “Good Morning America” in hopes it will encourage other victims to come forward.

“I was assaulted by Adam Venit,” Crews said on Wednesday’s program, who he noted at the time was “the head of the motion picture department at Williams Morris Endeavor, one of the biggest [talent] agencies in the world, period.”

The “Brooklyn Nine-Nine” cast member filed a police report last week on the incident and first disclosed it on Twitter last month, but did not name his alleged assailant at that time.

In his Wednesday comments, he said he was with his wife at a party in February of last year when he saw Venit, whom he said he had never met before, making crude gestures at him with his tongue.

“I’m looking and I’m like, is this a joke?” Crews said. “And he comes over to me, I stick my hand out and he literally takes his hand and puts it and squeezes my genitals. And I jump back like, ‘Hey, hey,’ and he’s still sticking his tongue out and I’m like, ‘Dude what are you doing? What are you doing?’ And then he comes back again!”

Crews said he pushed Venit away, causing the agent to bump into some partygoers. He said it took great restraint not to hit him any harder, especially after the way Venit responded.

“He starts giggling and laughing. I’ll tell you, I’ve never felt more emasculated, more objectified; I was horrified,” Crews said. “When I looked at him, it was rage. And when I say rage, I felt like I could punch a hole in his head.”

He said he told comedian Adam Sandler, who was also at the party, what happened and he reacted with equal shock. Crews and his wife, who he said witnessed the incident, left the party shortly thereafter. In the car, he found himself gripping the steering wheel of his car in fury.

The former NFL player credited his wife with helping him not resort to violence in responding to the incident.