DefenderNetwork.com
Home ENTERTAINMENT The Obamas’ first Netflix show might be based on book critical of... 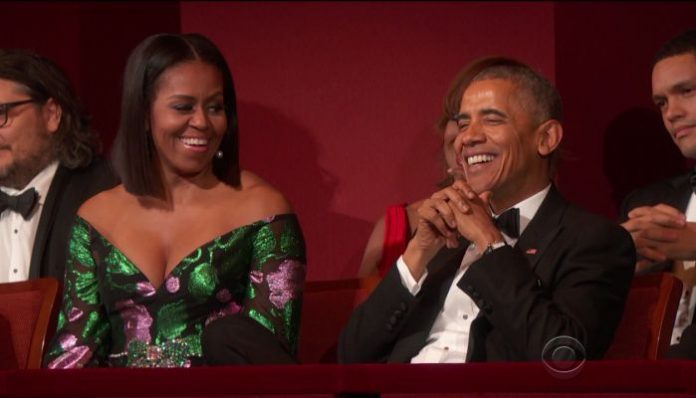 After landing a lucrative production deal with streaming giant Netflix earlier this year, Barack and Michelle Obama might adapt veteran journalist and author Michael Lewis’ book The Fifth Risk, which paints a critical portrait of President Donald Trump and his dysfunctional administration.

On an episode of Katie Couric’s podcast released Thursday, Lewis confirmed that the former president and first lady optioned the rights to his book for a possible Netflix series through their new production company, Higher Ground Productions.

The Fifth Risk chronicles the chaos and instability within Trump’s administration through interviews with government staffers, documenting the volatile transition between Obama’s and Trump’s presidencies in early 2017.

Several of Lewis’ previous books have been adapted into successful movies, such as “Moneyball,” “The Big Short,” and “The Blind Side.”

A spokeswoman for the Obamas’ production company confirmed the acquisition, but insisted that the project does not intend to make “a political statement,” and instead will select “the parts of Michael’s book that give life to the lesser-known functions of government.”

“Their goal is to produce a humorous series demystifying the little-known ways in which federal agencies improve our lives and serve our nation, from the food we eat to the planes we travel on,” she said in a statement. “Michael Lewis has written a love letter to the often-nameless public servants who carry out core duties that most of us never think about but help us every day. Think of this as a funny, timeless civics lesson for adults. It’s not a political statement.”

Think of this as a funny, timeless civics lesson for adults. It’s not a political statement.Spokeswoman for Higher Ground Productions

A spokesman for Netflix declined to comment on the possible project.

Earlier this year, a source familiar with the production deal told HuffPost that their first projects — which could include a variety of movies and series, from children’s programming to documentaries — would not appear on the streaming site until late 2019 at the earliest.

The Obamas have kept busy in recent months, working on various policy initiatives. Later this month, the former first lady is set to publish a memoir, Becoming, before embarking on a multicity book tour in stadium venues.

Over the last few weeks, she has also hit the campaign trail promoting her voter registration effort, urging voters to get to the polls for next Tuesday’s midterm elections.

The former president, still perhaps Democrats’ best surrogate on the campaign trail, has stumped for some of the party’s midterm candidates. This weekend, he will do a last-minute push for Florida’s Andrew Gillum and Georgia’s Stacey Abrams — who, if elected, would become the first African-American governors of their respective states. Abrams would also become the nation’s first black female governor.

While sporadically speaking out against Trump’s policies when they directly affected his presidential legacy, Obama in recent months has more forcefully denounced Trump during public appearances.

“Whatever your political background, I am hoping you think it is wrong to hear people spend years, months vilifying people, questioning their patriotism, calling them enemies of the people,” the former president said last week at a campaign rally. “And then suddenly, you are concerned about civility. Please.”