DefenderNetwork.com
Home ENTERTAINMENT ‘Wakanda Forever’ introduces the Dora Milaje to the rest of the Marvel... 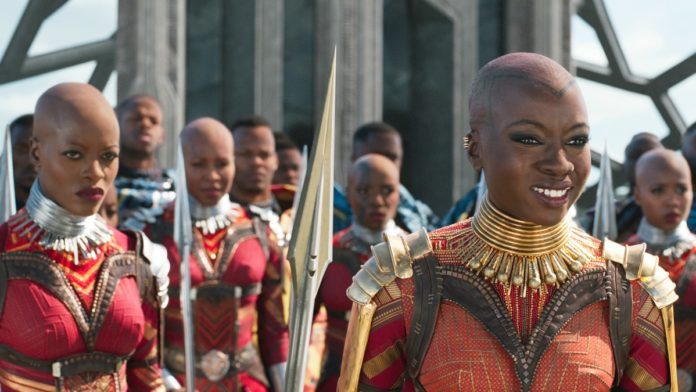 The Dora Milaje and their black girl magic are being turned into a comic book series thanks to the enormous success of the Black Panther movie. Now we’ll get a deeper look into the lives of the fierce women warriors holding things down in the world of Wakanda.

According to the Hollywood Reporter, Marvel Entertainment has enlisted the help of Nigerian award winning writer Nnedi Okorafor to pen the tale of the all-female bodyguard who are the backbone of Wakanda and ferocious protectors of King T’Challa. Okorafor looks forward to bringing the story to life.

“I’m super excited about writing this storyline. Powerful disciplined African women with futuristic spears who faced their shortcomings and changed a nation? Oh heck yeah, I’m so there,” Okorafor told Vogue, which initially broke the news of the new series. “Fans of the Dora Milaje can look forward to seeing them out in the world beyond T’Challa and the Wakandan throne’s shadow. They’ll get to see the Dora Milaje come into their own, while teaming up with the unexpected.”

Okorafora says the storyline will center around the Dora Milaje’s life outside of the Wakanda Kingdom. Can you imagine the kiss-ass ladies kicking it in Manhattan? The story will venture  outside of Wakanda when a threat born in the African nation ends up surfacing in the New York City borough.

If you watched Black Panther then you were likely captivated by the strength and overall badass-ness of the all-women Wakandan army, Dora Milaje. What you may not know is that the five-women crew–led by Danai Gurira‘s character Okoye–is actually based on a real tribe of fighters known as the Dahomey Amazons.

The publisher, editor Will Moss said in a statement, “We’re lucky to have Nnedi on board for this — she’s an incredible novelist, and her recent Black Panther: Long Live the King digital series proved that she’s a great comic book writer too. She’s come up with a crazy-tough problem for the Dora Milaje to solve — but if anyone can, it’s these crazy-tough women.”

Get ready for Wakanda Forever: Amazing Spider-Man No. 1 will be released digitally and in comic book stores June 27.

If you’ve been wishfully thinking of ways to get more Wakanda in your life, take note, because the Black Panther DVD will have deleted scenes!

Wait — is Killmonger still alive? We didn’t see him get buried. Did W’Kabi get killed by Okoye? She did kick his backstabbing butt!

Michael Shawver is the film’s editor and according to Shadow and Act he dishes on the release of the cut scenes and alludes to the fact that they will be eyebrow-raising.

“Hands down the most painful scene to cut was (one) with Danai Gurira (Okoye) and Daniel Kaluuya (W’Kabi). Toward the end, after things go bad and Killmonger is in control and all that, we’re talking about, what are they going to do? What is Wakanda going to become? Those are two powerhouse actors and it was an incredible scene with so many layers to it — boyfriend and girlfriend, it was general and her advisor, all those things. That was painful.”

We also know that King T’Challa (Chadwick Boseman) had strong ties to Zuri (Forest Whitaker) but there’s a scene that sets up their father/son connection even stronger, Shawver said.

“There’s a scene between Chadwick and Forest’s characters which sets up their relationship. It sort of lets you attach yourself to their father-son dynamic so that later on in the film … you really feel more.”

Black Panther has been on fire breaking records, and becoming a global blockbuster by setting trends around the world. It’s one of the blackest movies of the year and it has become the second highest-grossing comic book superhero movie of all time.

Marvel’s Black Panther is the gift that just keeps on giving.