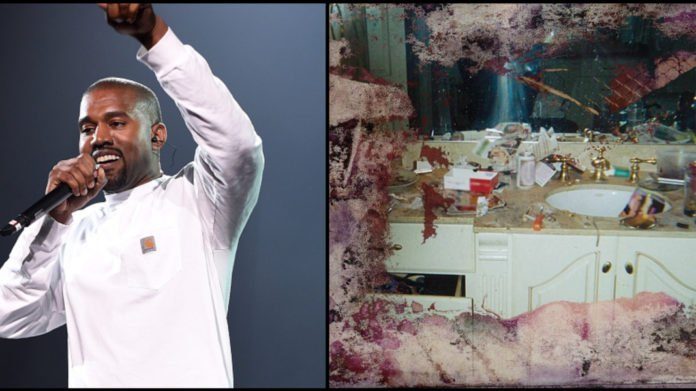 The fallout comes at you fast and this time, rapper Kanye West has crossed a fine line, causing fury after he posted a 2006 picture of Whitney Houston’s trashed bathroom, crammed and covered with drugs as the artwork for Pusha T’s latest record, DAYTONA.

The stunt has caused fans to pellet Pusha T’s Instagram with angry comments, slamming him and West for the tasteless act of posting Houston’s messy drug-infested countertop on a record cover.

“I think Kanya West should be ashame (sic) of his self would want someone to do that to his mother,” said user @stinethereal

Said @_nycrealist_: “Delete this…. remind me to take a picture of your death location and make a mockery of it.”

This is just the latest offense by West which also includes denigrating our enslaved ancestors. The creative choice for the upcoming, “Daytona” album (which dropped on May 25) was revealed by Pusha T himself during an interview with veteran radio host Angie Martinez.

The Clipse co-founder shared that West, who contacted him about the decision in the wee hours of the night, reportedly paid about $85,000 out of pocket for a grainy image of Houston’s bathroom, circa 2006. TMZ conducted a careful analysis to reveal what we’re actually looking at are “a crack-smoking pipe, spoons, white powder, and booze.”

After learning about West’s decision to use the image for his album artwork, even Pusha T said “I’m not really too, too, too entrenched in the art world like that. I’m just going to let him do that thing. And he’s paying for it.”

Producer Damon Elliott, who is Houston’s cousin and a music producer who has worked with Yeezy, said the distasteful picture even took him by surprise.

“I was actually in shock because I’m in the music business,” Elliott told People. “To do something for a publicity stunt to sell records, it’s absolutely disgusting. It hurt my family and my daughter. It’s petty. It’s tacky.”

Elliott said his daughter in fact called him upset about the photo.

“[She was] frantic. She sent me this picture from the album cover and I immediately got sick to my stomach because it took me right back to six years ago,” he said.

Elliot said that he wants to see the image switched out for something else as well as an apology from West.

While Houston’s drug addiction is a well-documented fact, the photo has somewhat been forgotten and perhaps even forgiven after the music legend was found dead in a Beverly Hilton Hotel bathtub in 2012.  Her death was ruled accidental as a result of “effects of atherosclerotic heart disease and cocaine use,” according to CBS.

Fans are not feeling the photo in fact, one user even called for women to stand against West and Pushing T by boycotting.

Another user suggested that West be more considerate of his choices.

“It’s very distasteful imo. Kanye should have known better.. Would he like a picture of his deceased mother slung across someone’s album cover. Smh,” said @shae_babe3.

“Very disrespectful how dare them both kanye clearly has went to far and is defiantly sick.”