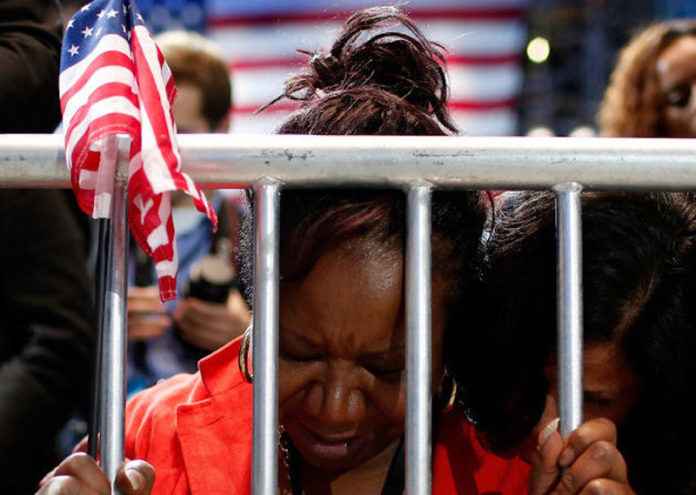 I woke up this morning feeling fearful.

I woke up hoping that the news of Donald Trump winning the presidency had just been a dark, twisted nightmare and that, with one sigh of relief, I would return to a state of normalcy.

Until I realized, things would be normal no more. That’s when the real fear set in.

Fear for my life, my safety and the direction of a country that will now be governed by a man who has failed to see my humanity as a black woman.

Fear for my family and friends who worry about their futures and the future of this country.

Fear for my unborn children who will grow up in a world impacted by the policies and legislation introduced by Trump.

Fear for all black people in America who don’t feel like they matter and have to fight to make sure we do.

Fear for all future generations who will be forced to reckon with the consequences of the current racial division in America.

Fear for Muslims in America who fear for themselves, and have for so long.

Fear for Latinos who don’t know what the future will look like for them, or their families.

Fear of white supremacist groups who feel more emboldened than ever to carry out acts of hate and want to rebrand racism into a mainstream movement.

Fear for all women who must live in a country led by a man who promotes rape culture, sexism and said “grab them by the p****y.”

Fear for how much we underestimated how racist and sexist America really is.

But, today I must declare, I refuse to let fear stop me from speaking out against the people and policies who create it.

I refuse to allow fear cripple the need to dismantle racism.

I refuse to allow black Americans to be belittled, undermined or disrespected by a president who fails to see our worth.

I refuse to allow hate to trump love.

I refuse to allow Trump to tear people of color down and spur greater division at a time when we need racial healing.

I refuse to stop speaking out against racism, misogyny, hate speech and bigotry.

I refuse to stop fighting back against oppression, in all its forms.

I refuse to lose hope that America can do better, and will do better.

I refuse to not make sure black voices are heard.

People of color may be among the most marginalized in America, but we need each other now more than ever. Some of our most important work and activism lies ahead and we must stand united in our fight for liberty and justice.

After all, we are stronger together.