DefenderNetwork.com
Home LEAD STORY Black lawmakers: If John Conyers has to go, why not Al Franken? 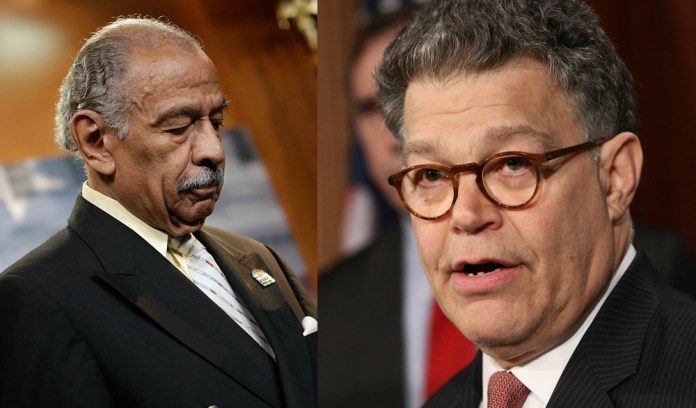 As more lawmakers call for Rep. John Conyers to resign, members of the Congressional Black Caucus are privately expressing their frustration at a different standard for Conyers than another Democratic member of Congress accused of sexual misconduct: Al Franken.

After House Minority Leader Nancy Pelosi called for Conyers to step down on Thursday, Conyers’ lawyers seemed to suggest that Pelosi and other Democrats calling for Conyers’ resignation were treating the two men differently because of race.

“Nancy Pelosi is going to have to explain what is the discernible difference between Al Franken and John Conyers,” Arnold Reed, Conyers’ attorney, told reporters.

While other members of the CBC did not attack Pelosi specifically, there have been rumblings within the caucus about the different treatment given to Conyers versus Franken.

“I think the chorus of people that are calling for John to resign is noticeably larger than everyone else,” CBC Chairman Cedric Richmond said in an interview.

The caucus is reportedly hard-pressed to come to an agreement on how to handle the allegations. As accusations against Conyers continue to mount, the CBC believes he should resign, but they are frustrated by the racial undertones of the conversation within the Democratic Party.

Although Rep. Kathleen Rice (D-NY) has called for both Conyers and Franken to step down, no Senate Democrats have called for Franken’s resignation, further frustrating the caucus.