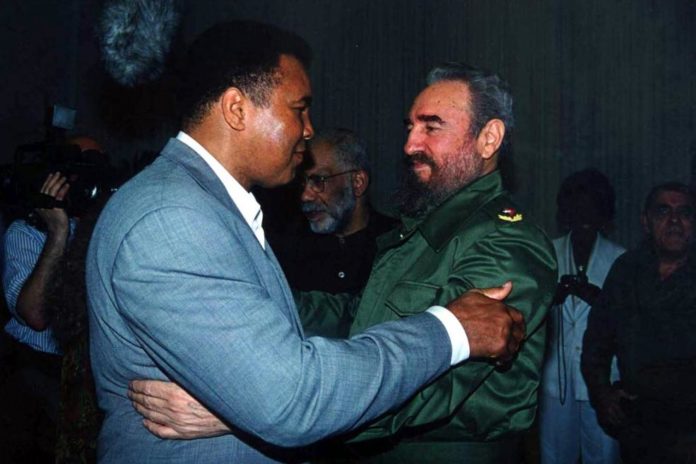 The Harlem audience was determined to cheer everything Nelson Mandela said, which meant that ABC Nightline anchor Ted Koppel had to accept that he was at a disadvantage—what he called “a hometown crowd.”

It was 1990, and black America had been in the throes of Republican leadership for a decade. The Cold War had not begun to cool. Mandela—viewed then as a revolutionary leader of the African National Congress trying to destroy the white-minority racist apartheid regime of South Africa, not the cuddly teddy bear of reconciliation of a democratic one-party state that would define him later—had been recently freed thanks to a worldwide movement on his behalf. A critic in the crowd asked tough questions about Mandela’s support of Palestinian leader Yasser Arafat, Libyan leader Muammar Gaddafi and Cuban leader Fidel Castro.

I remember Mandela’s words as if it was yesterday: “One of the mistakes that some political analysts make is to think that their enemies should be our enemies. That we can’t and will never do.” The crowd exploded in applause for almost a minute after the first sentence. When was the last time a black leader sounded that intellectually decolonized on national television? Since Stokely Carmichael in the late 1960s?

“We have our own struggle, which we are conducting,” Mandela patiently explained, “… and our attitude toward any country is determined by the attitude of that country to our struggle.” More thunder from the crowd.

And then to the point: “Yasser Arafat, Col. Gaddafi, Fidel Castro support our struggle to the hilt,” not just in rhetoric. “That is the position.”

Fidel Castro, who died on Friday at the age of 90, believed in and actively supported liberation struggles that freed oppressed people, from the Motown era to this morning. Because of that belief, he had a special relationship with African people, including African Americans.

Don Rojas, a longtime activist who was a former press secretary for Grenadian Prime Minister Maurice Bishop, a Marxist revolutionary politically inspired by Castro, remembers this era well in an email comment this afternoon: “His concrete support to the liberation struggles in Southern Africa will go down in the annals of history as one of the most amazing demonstrations of solidarity in modern history.”

And “solidarity” was the operative word. Castro’s revolution sparked leftist mobilizations around the world, including in America. The Black Panther Party’s experiment with radical social and political democracy in America, for example, comes from both African liberation movements and Castro’s Cuban revolution.

Journalist and author Herb Boyd emailed me this comment this morning: “My wife and I are planning to go to Cuba with a contingency arranged by the Greater Harlem Chamber of Commerce in February. We were hoping to get there before Fidel joined the ancestors. Now I have to rely on that moment 16 years ago when I was among more than 3,000 crammed into Riverside Church to hear Fidel for nearly four hours lambaste U.S. foreign policy and the accomplishments of the Cuban government. He was the last of the world’s great revolutionary leaders and he has a special place in that pantheon and my few memories of him.”

The Riverside speech was not Castro’s first visit to Harlem. In 1960, while in town to verbally attack the United States in the United Nations, he took up residence in Harlem’s Theresa Hotel, where he had a short but significant conversation with Malcolm X, then struggling against the Nation of Islam’s restrictions against participating in social movements.

Around this time, a young beatnik poet named LeRoi Jones visited Cuba with a delegation of American writers and artists. The confrontation he had there with a female revolutionary, recalled in his essay “Cuba Libre,” forever changed him:

“Everyone in the world,” she said, with her finger, “has to be Communist or anti-Communist. And if they’re anti-Communist, no matter what kind of foul person they are, you people accept them as your allies. Do you really think that hopeless little island in the middle of the sea is China? That is irrational. You people are irrational!”

I tried to defend myself, “Look, why jump on me? I understand what you’re saying. I’m in complete agreement with you. I’m a poet  . . .  what can I do? I write, that’s all, I’m not even interested in politics.”

She jumped on me with both feet as did a group of Mexican poets later in Habana. She called me a “cowardly bourgeois individualist.” The poets, or at least one young wild-eyed Mexican poet, Jaime Shelley, almost left me in tears, stomping his foot on the floor, screaming: “You want to cultivate your soul? In that ugliness you live in, you want to cultivate your soul? Well, we’ve got millions of starving people to feed and that moves me enough to make poems out of.”

Radicalized first by this experience and later by Malcolm’s assassination in 1965, Jones became Amiri Baraka, one of the greatest radical poets of the 20th century and a founder of the Black Arts Movement.

Cuba has kept the revolutionary spirit alive, regardless of its problems. For example, Assata Shakur, a former Black Panther and Black Liberation Army member who escaped to Cuba after breaking out of a New Jersey prison in 1979, has enjoyed political asylum there for at least two decades. The government has refused to extradite her back to New Jersey. Castro’s death may worry some black radical activists, afraid that Cuba’s posture will change.

Castro’s legacy is found in the margins of American life. Revolutionary theorist George Jackson, a martyr of the Black Power Movement and one of the many black activists inspired by Fidel, wrote the following about black revolution in his posthumously published book, Blood In My Eye. It can be used today as the dreams of Bernie Sanders’ supporters yield to the reality of President-elect Donald Trump, and it can be used to sum up Castro’s impact among those black people who struggle from the radical end of the spectrum:

“We come to our conclusion: the only resource that is left to us. Freedom means warmth and protection against harsh exposure to the elements. It means food, not garbage. It means, truth, harmony and the social relationships that spring from these. It means the best medical education whenever it’s needed. It means employment that is reasonable, that coincides with individual necessities and feelings. We will have this freedom even at the cost of total war.”

Propped up by the Soviet Union, Fidel Castro tried to implement a society in which all Cubans, including the poorest (read: darkest) got free health care and free education. He reached for his dream using words and bullets, becoming a guerrilla who violently took down Fulgencio Batista’s dictatorship and stood up against the capitalist United States. The nation he created was—is—in no way perfect: Cuba is decaying from the inside and out, and it has race problems it must deal with. But Castro showed the world that the possibilities of human existence were not limited to a system that left a tiny minority with all the land, wealth and power.

For decades, he did this openly, showing good humor, a surprising lack of fear of consequences and an iron fist. Black Americans who fight for a more equitable society, particularly those who witnessed Castro’s revolution from these shores, will not remember his human-rights abuses or tactical mistakes. They will always teach the most important thing: That during a revolutionary time he helped start, the Cuban leader identified with revolutionary Africans and black Americans and shook that fist—for himself and on the behalf of his allies—against their enemies.