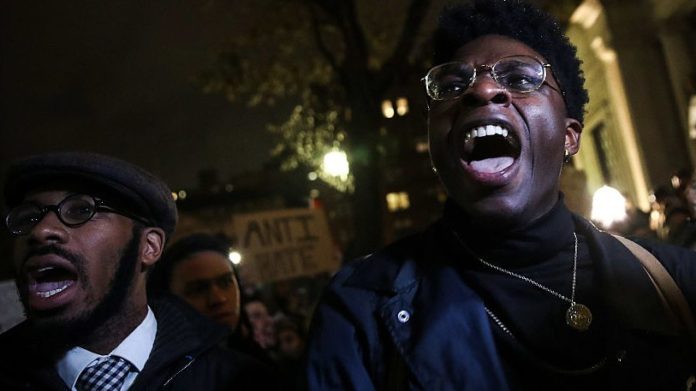 As I go through my timeline post-election, I see the anger, mistrust, distrust, pain, sorrow, and about 50 other adjectives that can describe how “half” the population feels.space“> The day after Election Day, we woke up in 1955 to find out that Donald Trump would be our 45th president of the United States of America.

A man who over the last six years has spouted every “ism” and “phobia,” and denied that our beloved President Barack Obama was not a U.S. citizen, will in 100 days have access to the nuclear codes. Post-racial America this morning took a look in the mirror and realized just how racially divided this country still is.

The “Whitelash” we experienced yesterday had been bubbling for some time now and it came out in fervent numbers at the election polls. According to most polls, white men and women were angry about the current direction of the country and wanted to “change” the entire system. Or in other words, white voters were angry at white politicians that they feel created a system that’s only helped white people. They then overwhelmingly elected an angry white man with no experience with the hopes of making the system that works for them work even better.

This one is a hard pill to swallow as a minority. This election result has set back whatever notion of “progress” we thought America was on, and shown the true colors to the world of what America actually is. This election has brought out the worse in many people in this country and reminded us that we aren’t too many generations removed from slavery. And even when we “abolished” slavery, we still had to fight every step of the way during the Civil Rights Movement, which led to the end of segregation and the groundbreaking Civil Rights Act and Voting Rights Act. But in one fell swoop, we watched the country that took the progressive step of having its first African-American president, and replaced it with a man that the nation’s forefathers would be proud of.

As a minority population we have been through the struggle in every generation of our existence in this country. I see people saying “God got us” and I believe that he does. We made it through slavery and Jim Crow (and Bush), however, always having to fight and struggle to exist isn’t OK.

We as a people have some work to do.

Folk in the black community got caught up in the “savior syndrome” on Election Day; the thought that voting is the primary part of “doing the work” that needs to be done in order to sustain our rights and increase our access to equity and equality. Voting is important yes, but if you are hinging your hopes on the fact that elected officials from the local level to the top of the ticket can fix the mess that is America, then I have a bridge to sell you. I urge those who are dissatisfied with the election results to think of voting, going forward, as the last step in the political process after the work has already been done.

So what should moving forward look like for us?

It’s important to take a step back from this election and think about what involvement in one’s own community looks like. There are many grassroot organizations out here fighting for black lives that could use a helping hand and funding. Continuing the work of the Black Lives Matter movement is going to be important as we move into a Trump presidency. Also expanding into our own buying power and investing in our own infrastructure is going to be necessary for our economic survival. This means supporting black banks and businesses, helping our local community based organizations that do much of the ground work, and not putting the responsibility for change in the hands of our local politicians.

This means that we as a race need to become the change that we want to see. This starts by telling our own narrative and emphatically demanding that we have a seat at the table when decisions are being made that affect our community. This day should be used as the catalyst for many of us in the community to become the change that we wish to see. We would be doing a disservice to ourselves if we let another four years go by without getting involved in the work that is already being done on our behalf. As we dedicate ourselves to doing this work, we dismantle the notion that a politician can do the work for us.

We have been at this point before, and now is the time we rise up and demand that our blackness not be dehumanized and politically exploited by Trump and the Republican Party. With this election, America has reopened the 400-year old-wound, doused it with salt and left us there for dead.

On Election Day 2016 we took a major hit, but I refuse to let myself and others lay down on the mat. Today we begin healing again. Through self-care, through loving on each other, and refusing to take this laying down. Being black is everything, and now we must mobilize to let the world know that, too.