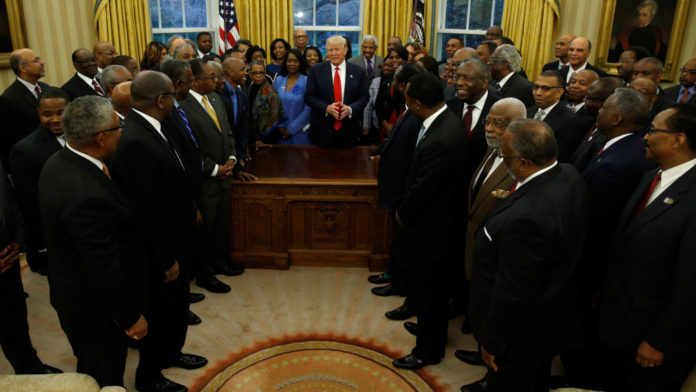 Although an upcoming White House summit where President Donald Trump will meet with the leaders of historically Black colleges and universities has drawn a lot of criticism, several HBCU leaders say that they are committed to moving forward with the meeting, reports USA Today.

While some HBCU presidents have made the decision to pull out of the event—which is slated to take place on Monday—those who still plan on attending believe that it’s crucial to meet with the president so that they can voice their concerns, the news outlet writes. “It’s important that we be at the table,” David Beckley, president of Rust College, told USA Today. “We have to be there to express our concerns. I’m willing to try again. I’m not sure how many more times I’ll go — based on results of this trip.”

But will a seat at the table guarantee that their concerns will be addressed?

In February, President Trump met with a collective of HBCU presidents to discuss the financial needs of Black institutions and an executive order which moved the HBCU initiative from the Department of Education to the White House. Following the meeting, then-Morehouse president, John Wilson Jr. shared that the exchange was “troubling.”Not to mention, the attention was diverted from their concerns to a viral photo of Kellyanne Conway sitting awkwardly during the meeting.

In a piece featured on Medium, Dillard University President Dr. Walter Kimbrough shared that the meeting turned out to be a photo-op for the president. “There was very little listening to HBCU presidents today- we were only given about 2 minutes each, and that was cut to one minute, so only about 7 of maybe 15 or so speakers were given an opportunity today,” he wrote.

Since that meeting went awry, things have gone downhill between Trump’s administration and HBCUs. Around the same time that the meeting took place, U.S. Education Secretary Betsy DeVos came under fire for making uninformed, ignorant remarks about HBCUs being “pioneers of school choice.” In May, while signing a government spending bill, Trump implied that federal financing for historically Black colleges and universities was unconstitutional.

According to NPR, this week Tim Scott—the only Black Republican in the Senate—sat down with Trump to discuss his failure to condemn White supremacists during the Charlottesville chaos. The meeting proved to be ineffective after Trump still blamed “both sides” for the events that took place.