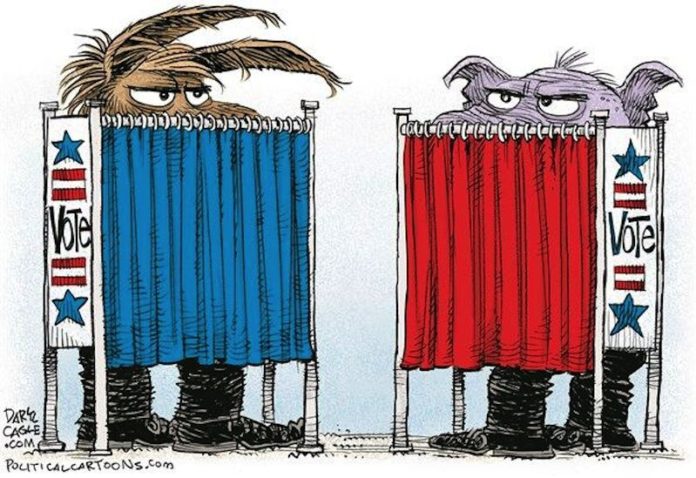 Shortly after Georgia Congressman John Lewis spoke movingly at the opening of the National Museum of African American History and Culture in September, he was asked on a radio show if he thought this was the time to organize another march on Washington.

Without missing a beat, he replied: “I think the best march that we can have right now in America is on Election Day, [where] all of us all over America – Black and white, Latino, Native American, young people – march to the polls. The vote is precious. It’s almost sacred. It is the most powerful nonviolent tool we have in a democratic society.”

On March 7, 1965, when Lewis was 25 years old, he and Rev. Hosea Williams were leading 600 other people in a nonviolent march from Selma, Alabama to the state capitol in Montgomery to demand voting rights for Black Alabama citizens. They and others were brutally attacked by lawless Alabama state and local law enforcement officials at the Edmund Pettus Bridge.

Lewis’s skull was fractured and dozens of marchers had to be treated at the hospital. The televised images of “Bloody Sunday” and the savage beatings shocked the nation. While the massive television coverage of this brutality was new for many white Americans, for African-Americans the attacks were just one more episode in a very long history of hostile Jim Crow resistance to their struggle to exercise their constitutional right to vote.

It’s a history that 94-year-old distinguished Sixth Circuit Judge Damon Keith knows all too well. He wrote a scathing dissent after two judicial colleagues upheld legislation allowing the state of Ohio to roll back voting rights. Judge Keith, a former civil rights lawyer, immediately recognized the Ohio laws as yet another 21st-century tactic for disenfranchising Black and other non-white voters.

In his dissent he wrote: “The utter brutality of white supremacy in its efforts to disenfranchise persons of color is the foundation for the tragedy that is the majority’s effort to roll back the progress of history. I will not forget. I cannot forget – indeed America cannot forget – the pain, suffering, and sorrow of those who died for equal protection and for this precious right to vote.”

Some states are committed to doing the right thing: California, for example, has passed legislation making it easier to register to vote and this year has recorded its highest number of registered voters ever.

Ohio is one of a number of states on the wrong side of history today where the right to vote is under deliberate assault. In some states including Texas, North Carolina, Wisconsin, Michigan and Kansas, courts have ruled the latest attempts at disenfranchising voters unconstitutional. But we can never let our guard down when any state is being affirmed in its calculated attempts to shut out some voters and make it harder for citizens, especially people of color, to exercise their constitutional right to vote.

The successful attack on non-white voters in Ohio is an attack on all of us and our democratic process. We must fight against every new effort to turn back the clock on racial and social justice and everyone who has the hard-won right to vote must never take it for granted and must always use it.

Judge Keith and Congressman Lewis remind us how those who struggled and lived through the Civil Rights Movement know firsthand that the right to vote is something so many Black Americans fought and died for not very long ago. Many of those brave nonviolent warriors could not have imagined – as Robert Kennedy correctly predicted – that within a generation we would elect our first African-American president.

One hundred years ago American women were still marching and fighting for equal voting rights not yet guaranteed by the Nineteenth Amendment. Around the world others are still struggling and sacrificing for a freedom too many Americans now take for granted or neglect to use. Every Black American has a responsibility to our forebearers who could not vote and who struggled, even died, to attain it, to use it and make our votes count.

About 20 years ago, I wrote a letter to my three sons urging them when they grew up to use their political power for others less fortunate and to always vote and hold those they vote for accountable to ensure a more just nation.

In a democratic society, if we like or don’t like what our political leaders are doing and stand for, we must make that clear through our voices and our votes and our monitoring of their actions. Staying home and failing to vote is a knife in the heart of our democracy.