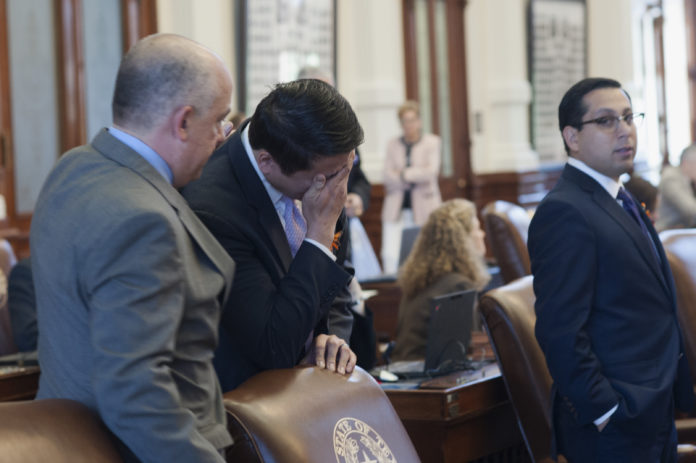 The Texas House jumped off a political cliff this week by passing anti-immigrant legislation that deputizes local police as federal immigration officers and jails officials who don’t comply. Outnumbered Democrats tried to fend off the so-called sanctuary cities bill with a hunger strike, legislative maneuvers, organized protests and tearful pleas on the House floor, but the final vote fell along party lines.

During the 16-hour debate Wednesday into Thursday, Republicans swatted attempts to soften Senate Bill 4. In doing so, the GOP voted to allow cops to question people, including children, about their immigration status regardless of whether they’ve been arrested. Democratic lawmakers compared SB 4, which is likely now on its way to becoming law, to the Chinese Exclusion Act of 1882 and the internment of Japanese-Americans during World War II.

After relying heavily on cheap, undocumented labor to bolster its economy — and generally steered clear of Arizona-style immigration measures — Texas has decided the million or so undocumented immigrants in the state are no longer welcome.

And while there is plenty of blame to go around — Governor Greg Abbott declared a crackdown on “sanctuary cities” as a legislative emergency — editor Forrest Wilder points to House Speaker Joe Straus and those closely aligned to him. Straus and his lieutenants in the House could’ve killed SB 4, but, as Wilder writes, “The center did not hold.”