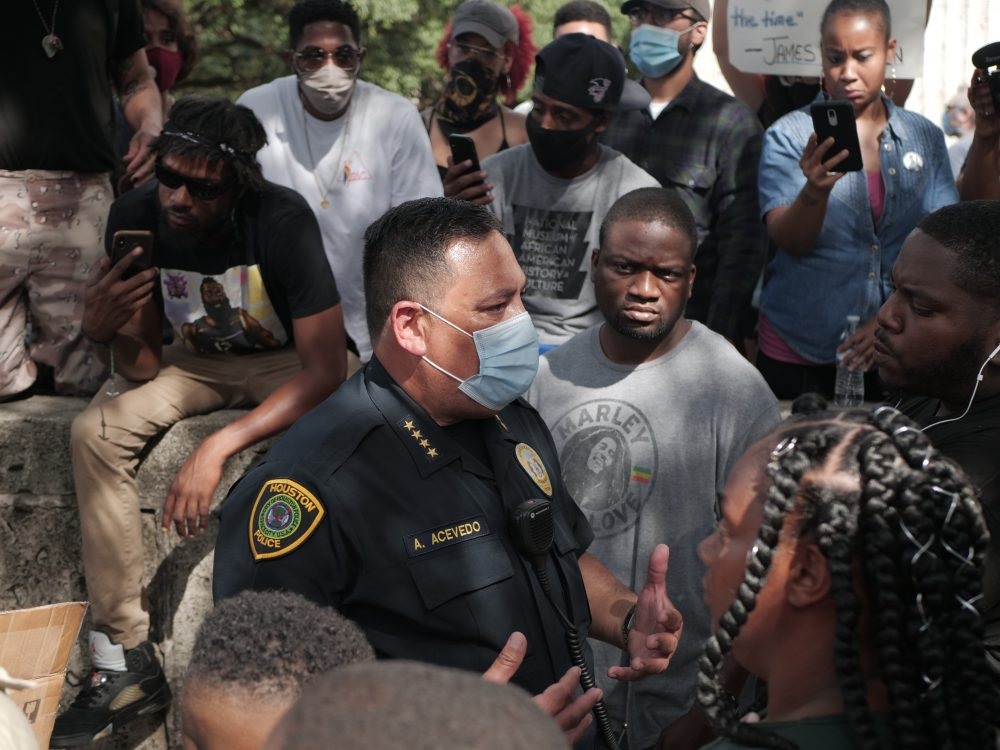 He made headlines marching alongside protesters in Floyd’s old Third Ward neighborhood towards City Hall. And as president of the Major Cities Chiefs Police Association, he’s been considered an advocate for community policing.

“When your community’s hurting as much as our community was hurting after the death of George Floyd in Minneapolis, I felt it was very important to be out there and show empathy, and send a message that we care, and most importantly, to be able to listen and interact,” Acevedo said in a recent interview with Houston Public Media. “And hopefully, plant seeds of trust and cooperation and progress.”

But as police departments across the country have come under scrutiny, activists in Texas have also called for reforms — including right here in Houston.

But they stressed that concrete moves must be taken to put those recommendations into action.

Of the recommended reforms, one issue concerning the ACLU of Texas is how and when body camera footage is released to the public when a police officer takes a life. Police killings have been a major topic in Houston, especially after the death of Nicolas Chavez on April 21.

Four HPD officers were fired in response to Chavez’s death, after Acevedo reviewed footage from the scene, calling 21 of the 24 shots fired “not objectively reasonable.”

But it took HPD almost five months to release that footage to the public. The task force recommended a maximum 30-day period from the time the incident occurred for the department to release the footage.

Nick Hudson of the Texas ACLU called it “a strong recommendation.”

“The mayor and council should consider this ordinance and pass it within two weeks, because justice can’t wait,” Hudson said. “Anything less than that should make the public question whether there is the political will to do much of anything to make police accountable and transparent to do much of anything in the city of Houston.”

Another key issue brought forth by activists, is whether no-knock search warrants should be allowed in Houston. Alan De Leon, with Move Texas, said police should use “quick-knock” warrants, in which police knock and announce themselves before immediately forcing entry.

That issue is also front and center nationally, after the shooting death of Breonna Taylor in Louisville, Kentucky at the hands of police officers.

It’s also top of mind in Houston, where a deadly botched drug raid on Harding Street resulted in six officers being charged with 15 felonies last year.

Acevedo said HPD hasn’t done a no-knock raid since Harding Street, and that they should only be used when someone’s safety is in danger, like in a hostage situation.

But the police chief said he doesn’t support an all-out ban on no-knock warrants.

“The only time that we use a no-knock warrant as long as I’m here, would be in a case where we’re dealing with trying to rescue people, trying to stop someone from getting hurt,” Acevedo said. “And it has to be obviously in the most serious of circumstances.”

One reform Mayor Turner implemented last week for HPD is a “cite and release” policy, similar to one being used by the Harris County Sheriff’s Office. It gives police the option of issuing a citation instead of arresting people for low level misdemeanor offenses.

But there are concerns over the wording of that policy, and some argue it will disproportionately affect communities of color at higher rates.

“The policy as it’s written right now, if you take a look at it, includes 15 disqualifying circumstances that police officers pretty much have unrestricted discretion to arrest somebody for citation eligible offenses,” said Naiyolis Palomo with the Immigrant Resource Center. “Which just allows for continuation of over-incarceration.”

It’s another point of disagreement for Acevedo, who said that his officers rely on that discretion to judge situations for themselves.

“You want to make sure there’s a legitimate reason or need to take a person into custody and it would require the involvement of supervisor personnel,” Acevedo said. “I think that will make sure we don’t have officers out there just willy-nilly initiating justice based on their own preferences.”

The mayor’s executive order requires a monthly report on the progress of the program.

City officials and the Houston Police Department are currently weighing the recommendations in the 153-page task force report, determining what can be put into action.

While there is no timetable yet for Turner to put forth any of the recommendations, Acevedo said the mayor wants to discuss short-term goals.

Ultimately Acevedo said putting reforms in place is a challenging task, in part because reaching a scenario where all parties are satisfied is near impossible.

“I think at times, people think that somehow, police departments can create a policy, a training mandate, that will guarantee perfection,” Acevedo said. “And the one thing that I know that is the absolute truth is the state of imperfection in terms of the human condition.”