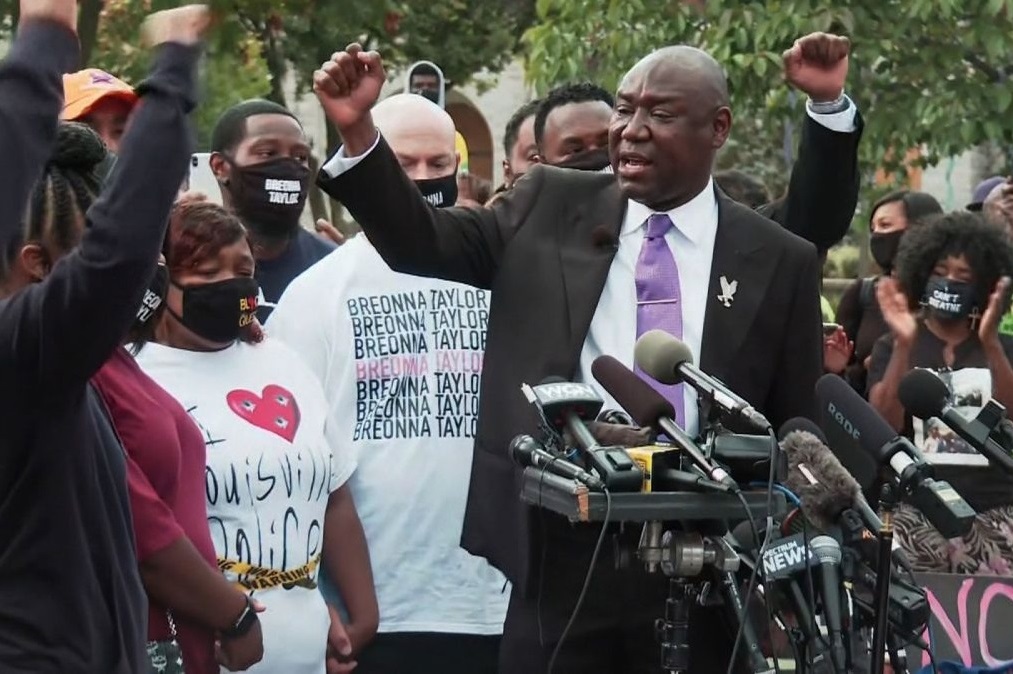 An attorney for Breonna Taylor’s family Friday again called on Kentucky’s attorney general to release the transcript of the grand jury proceedings in her death.

Attorney Benjamin Crump spoke in Louisville with Taylor’s family at a news conference. Her family is making its first public comments since Wednesday’s announcement that no police officer would be charged directly with her killing.

“Breonna Taylor’s entire family is heartbroken … and confused and bewildered, just like all of us, as to what did Kentucky Attorney General Daniel Cameron present to the grand jury,” Crump said at Louisville’s Jefferson Square Park.

“Did he present any evidence on Breonna Taylor’s behalf, or did he make a unilateral decision to put his thumb on the scales of justice to help try to exonerate and justify (the killing) by these police officers?” Crump said.

“Release the transcript!” Crump said repeatedly, leading a crowd in a chant.

Earlier, Crump said Friday he is counting on a different, federal investigation for justice.

“We hope the FBI investigation finally gets justice for Bre and her family,” Crump tweeted.

Protests erupted in Louisville and across the country after Attorney General Daniel Cameron announced Wednesday that a grand jury did not charge three officers directly with Taylor’s death, more than six months after police shot her in her home while executing a search warrant.

The grand jury indicted one officer on first-degree wanton endangerment charges, accusing him of blindly firing shots that penetrated the walls of a neighbor’s apartment.
The FBI has said it is investigating Taylor’s death.

Crump has called for Cameron to release the transcripts of the grand jury proceedings.

“They were baffled by what Kentucky Attorney General David Cameron actually presented to the grand jury. Did he present any evidence at all on behalf of Breonna Taylor?” Crump said to CNN’s Anderson Cooper on Thursday.

“We do believe (the investigations into Taylor’s death) was a coverup from go,” Crump said. “They always intended to sweep this under the rug as if Breonna Taylor’s life didn’t matter.”

“If these two officers did not get indicted, then the grand jury testimony ought to be public. You can’t hide behind the secrecy of the grand jury,” Stewart told CNN Thursday.

Fischer said Thursday the city was working with the attorney general’s office and the FBI to determine what information could be released without interfering with ongoing investigations.