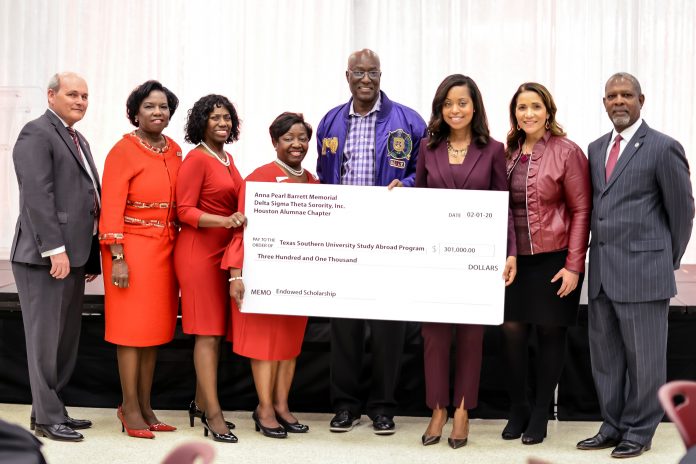 The sorority presented the university with $150,500 from Barrett’s bequest to the sorority, which was matched by Texas Southern University’s Foundation to create one of the institution’s largest endowments: the Anna Pearl Barrett Houston Alumnae Chapter, Delta Sigma Theta Sorority, Inc., Memorial Endowed Scholarship.

The $301,000 investment will financially assist students who desire to study in other countries and fulfills the one of the goals of International Awareness and Involvement, part of the sorority’s Five-Point Programmatic Thrust.

The Anna Pearl Barrett Memorial Endowed Scholarship was celebrated with a reception hosted this month at TSU and attended by more than 200 Deltas as well as Barrett’s relatives, Mayor Sylvester Turner, TSU Acting President Ken Huewitt, TSU Vice President of University Advancement Melinda Spaulding, and a representative from the Office of Congresswoman Sheila Jackson Lee.

“Our beloved soror, Anna Pearl Barrett, gave back,” Houston Alumnae Chapter President Jona Sargent said at the event before expressing gratitude to the Barrett family. “In grateful remembrance to our beloved soror, we say: Thank you.”

Barrett, who died in 2014, was the first TSU exchange student to study in Spain. She joined Delta Sigma Theta as a member of TSU’s Delta Gamma chapter. She also graduated from the University of Madrid and Middlebury College. A career educator, she taught Spanish in the Houston Independent School District and worked as a Bilingual Education Consultant. She traveled extensively in retirement.

Texas Southern University’s first study abroad group journeyed to Tanzania in 2001. Today, more than 100 TSU students travel abroad every year, according to Gregory Maddox, Ph.D., Dean of the Graduate School and Director of International Programs. A gift targeted to international travel at a historically Black university has urgency and significance. According to the Institute of International Education, undergraduate students from Historically Black Colleges and Universities participate in study abroad programs at lower rates than students from institutions throughout the United States.