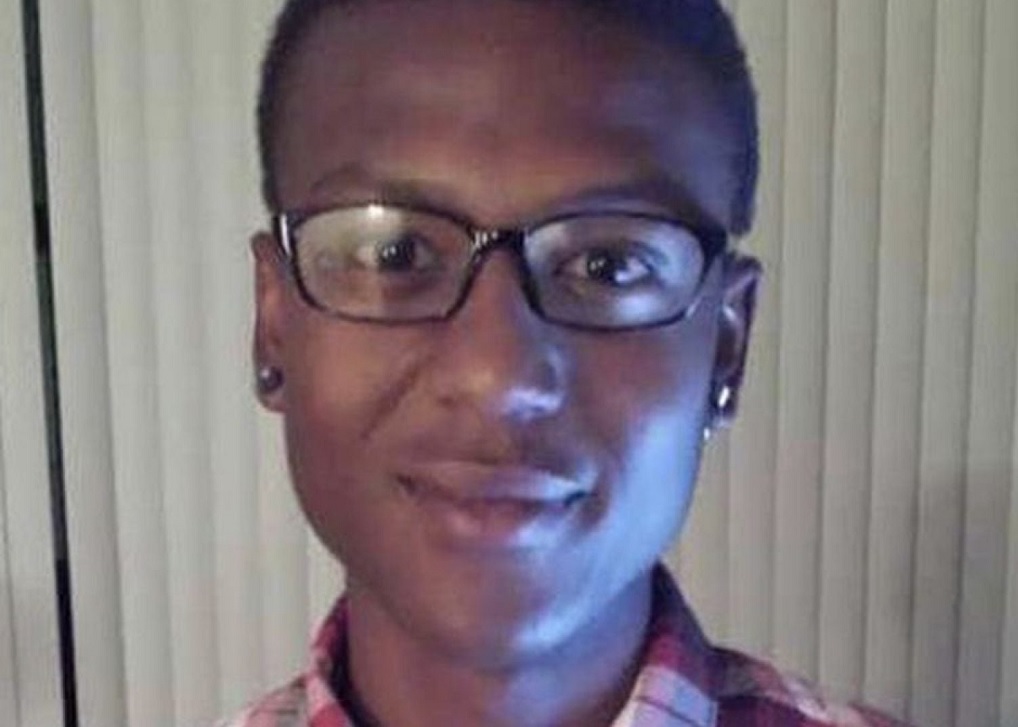 A recent social media outcry demanding Colorado officials launch an independent investigation into the 2019 death of a 23-year-old Black man in police custody has prompted Gov. Jared Polis to announce his administration will reexamine the case.

Last August, police officers in Aurora, Colorado, approached 23-year-old Elijah McClain as he walked home from a convenience store. The Aurora Police Department later said that a 911 caller had reported a “suspicious person” in a ski mask, and that when officers confronted McClain — who was not armed and had not committed any kind of crime — he “resisted arrest.” In the 15 minutes that followed, the officers tackled McClain to the ground, put him in a carotid hold, and called first responders, who injected him with ketamine. He had a heart attack on the way to the hospital, and died days later, after he was declared brain dead.

McClain’s family maintains that law enforcement’s use of excessive force led to his death. The officers, however, were subsequently cleared of wrongdoing, apparently on the basis of questionable body-camera footage and an allegedly inconclusive autopsy. McClain’s case has attracted renewed scrutiny amid national protests against systemic racism and the deadly tactics that police often deploy against Black people.

Here’s everything we know about Elijah McClain.

McClain was detained on his way home from picking up an iced tea for his brother.

Just after 10:30 p.m. on August 24, 2019, the Aurora Police Department received a call about a “suspicious person” wearing a mask and waving his hands. They dispatched three officers — Nathan Woodyard, Jason Rosenblatt, and Randy Roedema — who subsequently said McClain “resisted contact” and continued down the street.

According to McClain’s family, the 23-year-old had made a quick trip to the convenience store to pick up an iced tea for his brother. His sister later told a local ABC affiliate, Denver7, that McClain was wearing an open-face ski mask because he “had anemia and would sometimes get cold.” And although he was unarmed, simply walking home and, his sister said, listening to music, police say “a struggle ensued.” One officer accused McClain of reaching for his gun, and one put him in a carotid hold, which involves an officer applying pressure to the side of a person’s neck in order to temporarily cut off blood flow to the brain. “Due to the level of physical force applied while restraining the subject and his agitated mental state,” officers then called Aurora First Responders, who “administered life-saving measures,” according to a local NBC affiliate. Paramedics injected McClain with what they said was a “therapeutic” amount of ketamine to sedate him, while officers held him down.

McClain went into cardiac arrest on the way to the hospital, and was taken off life support on August 30. His family said at the time that he was brain dead, and covered in bruises.

Body-camera footage of the arrest did not come out for months.

Body-cam footage of the arrest does exist, although the ADP did not release it to the public until late November, months after McClain’s death. In the footage, an officer can be heard admitting McClain had done nothing illegal prior to his arrest; another accuses McClain of reaching for one of their guns. McClain, meanwhile, can be heard asking the officers to stop, explaining that they started to arrest him as he was “stopping [his] music to listen.” He gasps that he cannot breathe. He tells them his name, says he has ID but no gun, and pleads that his house is “right there.” He sobs, and vomits, and apologizes: “I wasn’t trying to do that,” he says. “I just can’t breathe correctly.” One of the officers can also be heard threatening to set his dog on McClain if he “keep[s] messing around,” and claiming he exhibited an extreme show of strength when officers tried to pin back his arms.

Very little of the officers’ protocol can be seen, however, because all of their body cams allegedly fell off during the arrest.

An autopsy initially listed McClain’s cause of death as “undetermined.”

McClain’s autopsy also raised questions. The Adams County Coroner announced in early November that it wasn’t clear whether his death had been an accident, or carotid hold–related homicide, or the result of natural causes. The coroner listed McClain’s cause of death as “undetermined,” but points to hemorrhaging in his neck and abrasions on different parts of his body. Noting that “an idiosyncratic drug reaction (an unexpected reaction to a drug even at a therapeutic level) cannot be ruled out” in reference to the ketamine dosage, the report’s wording seemed to pin responsibility on McClain himself.

“The decedent was violently struggling with officers who were attempting to restrain him,” it said, according to Denver 7 ABC. “Most likely the decedent’s physical exertion contributed to death. It is unclear if the officer’s action contributed as well.”

As Mari Newman, an attorney for McClain’s family, said at the time, though, “Whatever the report says, it’s clear that if the police had not attacked Elijah McClain, he would be alive today.”

And the officers involved were subsequently cleared of wrongdoing.

The APD placed Woodyard, Rosenblatt, and Roedema on administrative leave in the incident’s immediate aftermath. On November 22, Adams County prosecutors announced that they would not bring charges against the trio, who then returned to normal duty. According to the Sentinel, District Attorney Dave Young informed Aurora police chief Nick Metz in a letter that, “Based on the investigation presented and the applicable Colorado law, there is no reasonable likelihood of success of proving any state crimes beyond a reasonable doubt at trial. Therefore, no state criminal charges will be filed as a result of this incident.”

Metz subsequently called the officers’ threats to McClain “unprofessional,” and said that the comment had “been addressed with that officer through a written corrective action.” Newman, meanwhile, told the Sentinel: “If Aurora thinks this is appropriate policing, the community should be petrified. We are disappointed, but not surprised that once again, members of law enforcement will not [be] held criminally accountable for killing an unarmed Black man.”

Despite local media coverage and some smaller rallies, McClain’s death did not receive widespread attention in the press — not until the killing of George Floyd sparked widespread protests against racially motivated police brutality. Since then, a Change.org petition demanding “Justice for Elijah McClain” has garnered nearly 2 million signatures. A surge in support as McClain’s name is shared on social media and at demonstrations has translated to thousands of emails and calls to D.A. Young’s office, plus hundreds of complaints filed with the police department. All the attention appears to be creating some actual change.

Although Young said last week that he has no intention of reconsidering the case, City Manager Jim Twombly agreed on June 9 to undertake an independent investigation of McClain’s death, pursuant to Aurora lawmakers’ request. “We have watched the events over the last several days and it has become clear that public trust has been eroded,” council members Allison Hiltz, Curtis Gardner, and Angela Lawson said in an email to Twombly. “We know that the status quo is no longer acceptable in our criminal justice system. Our community has experienced pain and as leaders it is our responsibility to take the first step in restoring public trust.”

Twombly initially appointed Attorney Eric Daigle, a former police officer, to lead the review, a decision that prompted pushback from the city council.

“Unfortunately, an attorney with a long career in law enforcement that specializes in defending municipal police departments from liability claims doesn’t qualify, in our minds, as a neutral review,” the council said in a statement. Aurora mayor Mike Coffman then announced that Daigle’s contract had been terminated, and that he and the council will select a replacement.
Also on June 9, Aurora interim police chief Vanessa Wilson announced that officers would be banned from using carotid holds, and obligated to intervene when they see another officer use excessive force. They will also have to declare their intention to shoot before firing their guns. Additionally, two Aurora council members are seeking to make bans on chokeholds and carotid holds part of the city’s ordinance.

McClain’s family and friends described him as extremely gentle and very kind.

McClain worked as a massage therapist, and taught himself to play both the guitar and the violin. According to the Sentinel, he often spent his lunch breaks at local animal shelters, putting on concerts for cats and dogs because he believed music would help soothe their anxiety. Those who knew him describe him as gentle: “I don’t even think he would set a mouse trap if there was a rodent problem,” his friend, Eric Behrens, told the Sentinel.

He often developed friendships with his massage clients, like April Young, who told the Sentinel: “He had a child-like spirit … He lived in his own little world. He was never into, like, fitting in. He just was who he was.”

“He was the sweetest, purest person I have ever met,” another of his friends and former clients, Marna Arnett, added. “He was definitely a light in a whole lot of darkness.” Arnett believes that, in addition to helping manage a chronic chill that McClain attributed to his anemia, wearing a mask helped him manage his social anxiety. “He would hide behind that mask,” Arnett said. “It was protection for him, too. It made him more comfortable being in the outside world.”

Speaking to CBSN Denver, his mother, Sheneen McClain, described her son as incredibly determined. “I thank God that he was my son because just him being born brought life into my world, you know what I mean?” she said. “I know he was giving life to other people too.”

More than 2 million people have signed a petition urging government officials in Aurora, Colorado, to conduct a new investigation into the death of 23-year-old Elijah McClain.