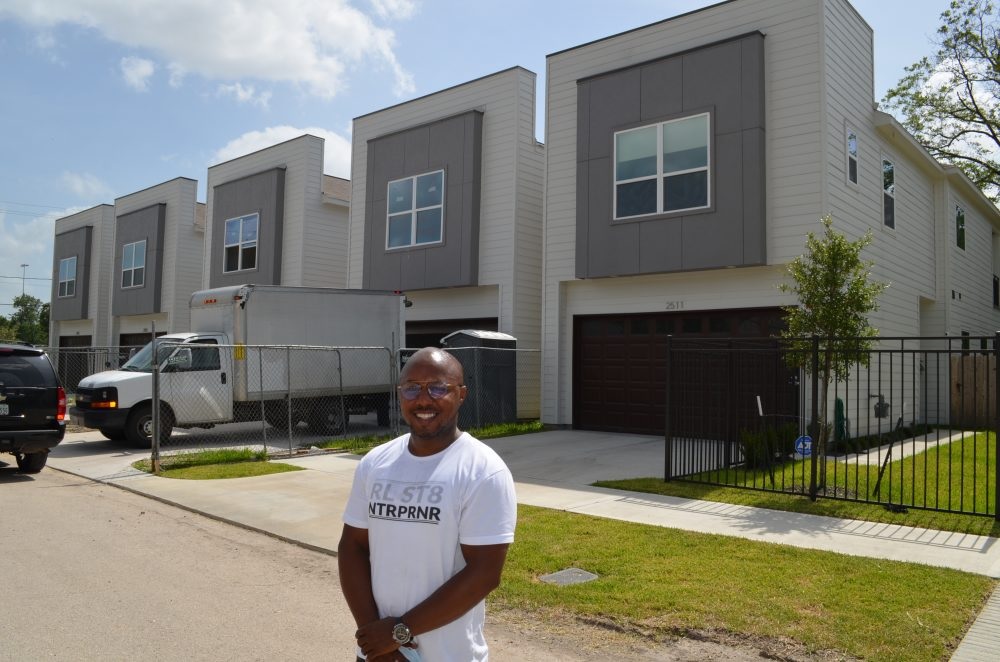 Communities across Houston are concerned about gentrification changing neighborhoods and pushing out long-time residents.

But in the historic Fifth Ward, one builder argues development can occur in a responsible way, that doesn’t uproot members of the community.

Chris Senegal built five two-story townhomes on Des Chaumes Street off Liberty Road, right by the Eastex Freeway. Each of the 1,700-square-foot, three-bedroom, two-bath homes are sold, and two of them have residents already. The other three are still being worked on.

Senegal’s target clientele are young professionals who maybe grew up in the community, made a career, and want to move back to the neighborhood.

“The young working professional that’s worked hard to go to school, probably has a lot of student loans and would love to move back to the neighborhood that they grew up in have no options, so they have to go to the suburbs,” he said. “So this is a model that allows them to have an opportunity to live in the neighborhood as well.”

Senegal bought the property in 2013 and cleaned it up, with plans to build nine more on the block, he said.

The homes go for $289,000 each, but Senegal believes he could ask a lot more — he said he’s sacrificing some profit in favor of a plan to revitalize the Fith Ward without changing its culture.

“When it comes to development, a lot of times there is a pretty significant spread between the cost of construction and the retail price per square foot,” he said. “So a lot of times it’s just a capitalism thing where there’s a margin that can be made where you’re still profitable without extracting every possible dollar out of the deal.”

“The Nickel,” as it’s sometimes called, was once a bustling center of the city’s African American community, with Black-owned businesses lining the neighborhood’s major thoroughfares just northeast of downtown Houston.

Besides this development, Senegal is overseeing a crowdfunded project called Buying the Block, which aims to redevelop a block on Lyons Avenue for both residential and commercial tenants while ensuring that rents remain low for the existing residents.

Back on Liberty Avenue, Senegal’s gray, modern, same-looking townhomes – all with a garage on the ground level – are a noticeable deviation from the look of the buildings around them. Most are old, one-story homes, surrounded by chain-link fences.

Clifton Soularie, who has lived in one of them for the last 30 years, said he has only one issue with the new development.

“I can’t see downtown anymore,” he said. “I used to sit on my porch and look at downtown and look at the fireworks and everything that was going on down there but now I can’t.”

Soularie also hopes the development won’t lead to higher rents in the area. He currently pays $560 a month, he said.

Zoe Middleton, a co-director at affordable housing advocacy group Texas Housers, said that worry is justified — gentrification is a growing concern in the Fifth Ward.

Middleton said it’s important for both government and developers to make efforts to mitigate the negative effects of gentrification. That could include legally binding agreements with community groups, for example, called community benefit agreements.

While she said she supports Senegal’s concept of trying to get people previously of the neighborhood to move back in, she cautioned that they should try to be part of the community, despite the economic differences.

Contributing to the neighborhood is something Devaughn Robinson said he’s trying to do. He and his wife are originally from the Bahamas and moved from Katy into one of Senegal’s townhomes with their 1-year-old son.

Robinson, who works for a biomedical equipment manufacturer, said they wanted to be in the city and around more people who look like them.

He said he doesn’t feel like a gentrifier because he shares the community’s ethnicity and culture and he is trying to improve the neighborhood.

“We’ve made maybe 2,000 calls to the city of Houston regarding picking up trash and fixing lights and repairing roadwork,” he said. “As long as (neighbors) understand that you’re not there to take over and take from them what they’ve known as home for the last 20, 30 years, then they’re appreciative of you coming into the neighborhood.”