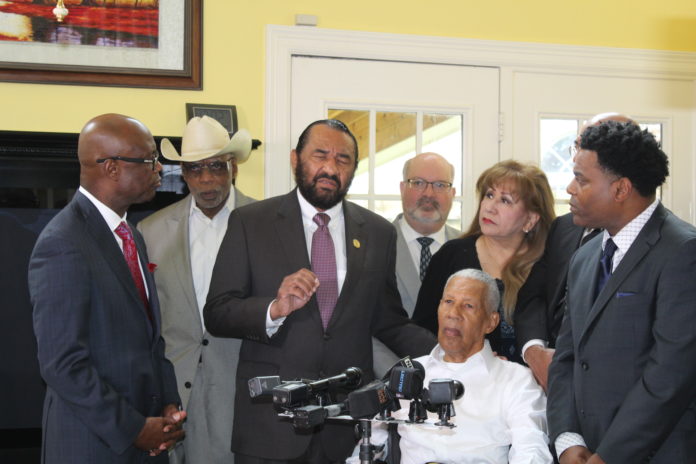 In response to Congressman Al Green receiving death threats on his voicemail after calling for the impeachment of President Donald Trump, Houston community leaders are demanding that law enforcement on all levels track down those responsible.

Two press conferences were held calling for action in the case. Among those attending the most recent press conference were Green, Rev. William Lawson, Bishop James Dixon and local NAACP President James Douglas.

Lawson, who was active during the Civil Rights Movement, said although he’s appalled, he’s not at all surprised to hear about the lynching threats against Green.

“Unfortunately, this kind of hatred was allowed in the ‘60s, but the difference [between then and now] was the law enforcement community was more active in seeing the case of death threats and death actions to justice,” Lawson said.

Green revealed that he’s still experiencing “ugly” voicemails, but contends they won’t stop him from continuing his work.

“I made a mistake earlier in my life. There was a cross burned in my front yard and I did not speak up,” Green said.

“That was a mistake. You cannot hide hate and pretend it doesn’t exist. You cannot pretend hate does not hurt and kill. I’ve made up my mind that I will not cower nor pretend. I will speak the truth.”

“This climate of hate surrounding the congressman is one where expressions of hate are more and more tolerated. We cannot be one America if any American can be hated upon without retaliation from all of us [leaders],” Dixon said.

“We urge proper law enforcement authorities to take full action investigating this matter until it is resolved,” he said. “We believe this level of investigation is necessary in order to send a strong message that this country will not tolerate hate speech and death threats against anyone.”

“Congressman Green is a valued public servant for the least, last and the left out,” Dixon said. “He’s stood against hatred and violence…we’re also calling on all leaders regardless of religious backgrounds or political backgrounds to stand up against hate toward any American and certainly against an upstanding elected official.”

“Let’s be honest, if Congressman Al Green was a white congressman and if the caller had a Middle Eastern accent, the person who perpetrated that call would have been caught by now,” he said.

“One of the death threats was left at brother Green’s local office – why hasn’t HPD done anything? However, when Tom Brady’s jersey came up missing right here in the city of Houston, there was an all-points bulletin put out on that jersey,” Muhammad said.

“Here we are 10 days away from you knowing that a U.S. congressperson has been threatened with lynching and you mean to tell me you can’t find who made that threat?”

“A threat on one of us is a threat on all of us,” Minister Robert Muhammad said.

Since the call to action, HPD Chief Art Acevedo responded on Twitter saying, “Houston Police is constantly working with our local, county, state and federal partners to keep our elected officials and community safe.”