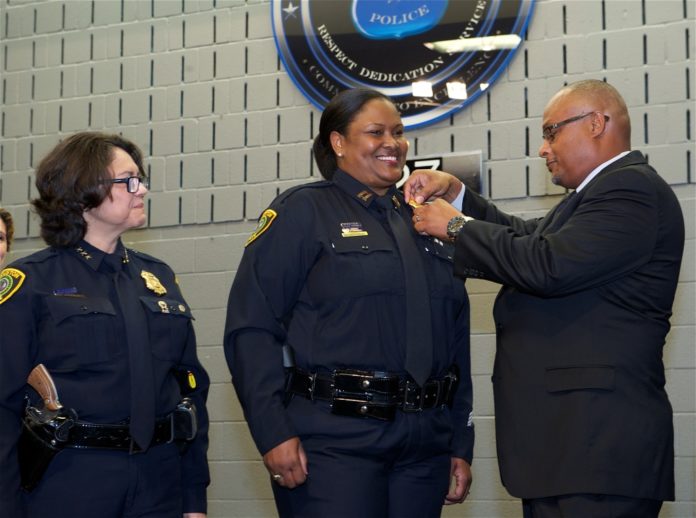 The contentious relationship between Blacks and police has a troubled history that goes back much further than Ferguson police shooting victim Michael Brown or the Black Lives Matter movement (BLM).

Often finding themselves in the middle of this fray are Black law enforcement officers forced to wrestle with allegiances and challenges from both sides.

“The most challenging aspect of my job is trying to perform my duties in a community-oriented capacity when the community views you as an enemy,” said Garner, a graduate of Willowridge High School and Texas Southern University’s Thurgood Marshall School of Law (TMSL).

Garner represents the middle ground between Blacks and police, readily acknowledging and even defending calls made by many Blacks demanding police reform.

“I believe the recent polarization of police shootings is, unfortunately, business as usual for many in law enforcement and Black communities,” Garner said. “I would like for those who oppose the BLM movement to consider the existence of simultaneous issues in the Black community.

“Yes, Blacks are killing each other, and police are killing Blacks as well. There doesn’t have to be one issue over the other; both need to be addressed,” he said.

Garner argues that the Black community has its own work to do to improve the relationship, and believes the best advice for Blacks encountering police is to comply in the moment, and argue later.

“Certainly, there have been incidents where the victim did comply only to be shot or abused anyway. However, I’ve witnessed citizens go to great lengths to argue and rebut a case on the side of the road when the courtroom is where the argument should take place,” stated Garner, whose path to law enforcement was unconventional.

As his childhood dreams of playing professional baseball dimmed, he sought a career that could hold his interest.

“A girlfriend’s father worked for the Houston Police Department. I wanted to impress him as a ‘career-seeking’ young man, and I suppose my pursuit of policing started there.”

Sheryl Victorian, who recently became only the second Black woman to reach the rank of HPD captain, knew since she was 9 she wanted to be a cop.

Amazingly, as a toddler Victorian feared police so strongly that when her mother attempted to get her to shake an officer’s hand she fell out kicking and crying. But her mindset changed dramatically after her father’s death. During his funeral Victorian said she saw police at their best.

“To avoid being overwhelmed by all that was going on during funeral proceedings I focused on the police who were escorting our family,” she said.” “I saw their compassionate side, how they looked out for my family. I saw the respect they received from others, and I fell in love.”

Though numerous Black officers testify to being viewed by other Blacks as “the enemy,” such was not Victorian’s experience.

“When I was on the street as a sergeant from 2007 to 2009, people knew me, and trusted me. There may be apprehension and distrust from people in general, but it’s all in an officer’s approach,” she said.

“For the community to see a person they know in law enforcement with the community’s best interest at heart is important,” she said.

“I can bridge that gap between community and police, because yes, I am African American and believe Black Lives Matter and in treating all people with respect. I also believe in working with community for better policing.”

“Everyone has the constitutional right to protest government but I ensure you that today’s police departments want to listen and work with the community they serve,” Ashford said.

“This process is easier if all come to the table with open minds and not seeking self-serving tactics that don’t promote dialogue.”

Ashford, also a Willowridge alumnus with a master’s in Human Resources and Training from Amberton University, hopes to dispel what he identifies as the biggest misconception citizens have about police – that they are out to get people. He unequivocally rejects the notion that police are targeting Blacks.

“In no way am I excusing or trying to justify all of the shootings but I believe that media and some groups are sensationalizing shootings,” he said. “The dynamics of officer use of force are complex and do not lend themselves to surface and snap assessment based on limited information.”

Ashford insists officers do not take the use of deadly force lightly and understand the serious criminal investigative consequences involved.

“Like any organization you have officers that do things wrong but most officers only want to serve the community.”

As a rookie officer, Ashford was nearly shot. He kept the bullet to remind him of the dangers of his profession, a reality that became all too real for him when five members of the Dallas law enforcement community were killed in July by Micah Johnson.

“Officers understand from day one that the job is inherently dangerous and as a by-product of the job officers are always on a higher state of alert,” Ashford said. “The issue today is what appears to be retaliatory attacks on police officers for perceived unjust use of force.”

“It’s like being in a spousal relationship – both sides want to be heard and their issues addressed,” she said.