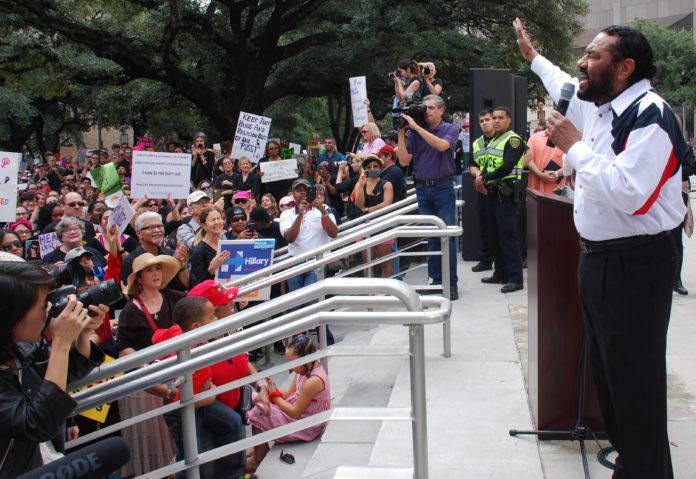 On Saturday, January 21, 2017, Congressman Al Green (TX-9) was proud to join the Houston Women’s March to support patriotic citizenship and equal rights for all. He addressed the thousands at the beginning of the Houston Women’s March with a rousing speech, then joined the marchers as they journeyed to the steps of City Hall. He later highlighted the importance of our diverse communities in the political process when he spoke on the steps of City Hall.

“We must not allow this election to cause us to become disillusioned or disheartened; the cause of equal rights for all continues,” Congressman Al Green said. “We are at a pivotal point in the history of our nation where people of good will who believe in equality for all can actively be a part of the solution or passively be a part of the problem.”

The Houston Women’s March is an official affiliate event of the National Women’s March on Washington, D.C. The goal of the march was to peacefully demonstrate against the hateful and divisive behavior of the past election cycle, which called into question the commitment of some elected officials to equal rights for all.

“We are at a seminal moment in time. If we do nothing we allow the hands of time to be turned back on the progress we have made as a nation,” Congressman Al Green said. “Let today’s march become a commitment to equal rights for all and greater participation in our political process by people of good will, young and old, from all segments of our diverse communities.”