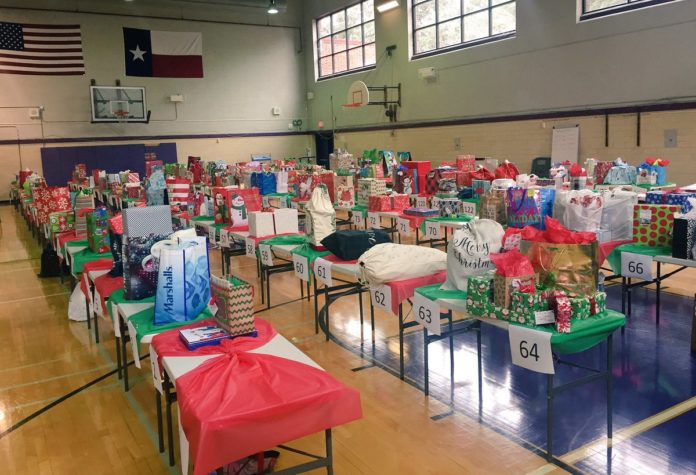 Excitement and anticipation filled the air at Northside High School on Wednesday, as 178 students and their families waited in the school gymnasium, perched in the bleachers above row upon row of Christmas presents.

The students were selected to take part in the third annual Christmas Gifts of Love event at the school, which pairs up students with donors throughout the district and community to provide the underprivileged students with holiday gifts. The event is an example of how the holiday spirit is spreading across district thanks to a multitude of HISD business and community partners.

Exciting day for @northside_hs, where many students are receiving gifts donated by @TeamHISD and community partners! Party starts @1 pm 👏🏻 pic.twitter.com/ZATGdER7Ij

Northside junior Christian Sosa, in his second year with the program, said it’s not only the gifts but also the relationships and support he has received that have made the holidays special for him this year.

“I’ve really gotten close to my counselors, and they have really been helping me out and trying to motivate me,” Christian said. “Throughout this event, you get the feeling that they’re there for you and they will always be there.”

In its third year, the Christmas Gifts of Love event has more than doubled the number of students from last year who received gifts. Student selection was based on factors such as financial hardship, homelessness, and those living with a grandparent or extended families.

Kids at @HoustonISD David Burnet Elementary are anxiously waiting to get their gifts from the Houston Young Lawyers Association #abc13 pic.twitter.com/UyqMfsnXm5

“This is an extra push to help (our students) get gifts for Christmas,” said Northside Principal Julissa Alcantar-Martinez. “We really wanted to make sure they had something special.”

This event was made possible due to generous donations and support from community partners such as Direct Energy, M.D. Anderson, the office of state Rep. Jessica Farrar, Fiesta Guadalajara, St. Patrick’s Knights of Columbus 8404, Stokes Hardware, and the Davis Alumni.