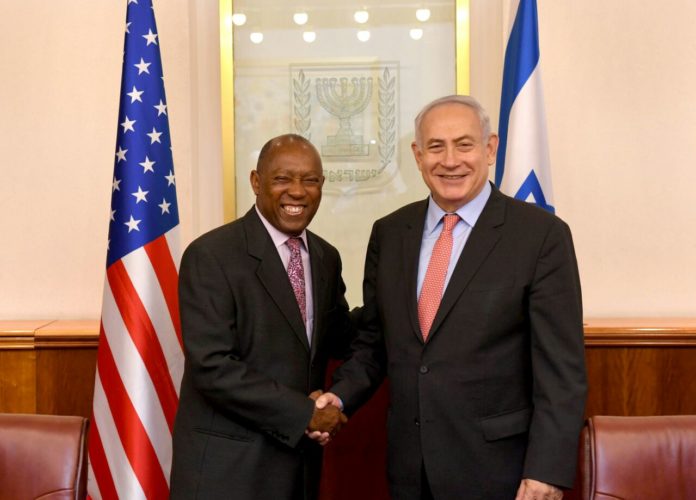 Mayor Sylvester Turner’s vision for Houston as a high-tech innovation hub took several steps forward after a successful economic development and trade mission to Israel recently. A private meeting with the Israeli Prime Minister Benjamin Netanyahu sparked a discussion regarding healthcare data mining and personalized medicine. Meetings with the minister of Energy and Infrastructure and the mayors of Jerusalem, Tel Aviv, Beersheba and Al-Bireh focused on Smart City management, energy connections, cyber security and tourism.

“As the energy capital of the world with the largest medical center in the world, Houston is in the enviable position of having vast resources at our fingertips,” said Mayor Turner. “Being able to create sustainable relationships in those industries with Israeli leaders in the ‘Startup Nation’ will have a major return on innovation. Our face to face meetings show that we are committed to our mission of expanding our tech industry and establishing an innovation district.”

“They call it ‘chutzpah’, we call it gall or nerve – one of the many ingredients that have made the Israeli innovation ecosystem continue to boom,” said Lance Black Medical Device Innovation Lead, TMC Innovation Institute. “The Texas Medical Center’s accompaniment to the Mayor’s Trade Mission was beyond productive as we had the opportunity to meet and form relationships with several of Israel’s accelerators/incubators, research institutions and over 50 start-up companies. Digital health and medical device technologies are a staple for Israel, and the Texas Medical Center is an ideal hub for these companies to validate their products and enter the U.S. market. The Texas Medical Center looks forward to building on these relationships and, subsequently, a bridge that will make the exchange of ideas a benefit to patients around the world.”

“I found the Mayor’s Trade Mission to Israel to be one of the most informative and useful visits in my professional career,” said Lone Star College System Chancellor Steven Head. “While I had traveled to Israel previously, this visit included four intensive days of meetings with business, political and educational leaders that provided an in depth understanding of opportunities and challenges in exchanges with the country of Israel. We also gained extensive knowledge about the history, culture and geo-politics of the region. We learned that Israel is a country rich in history and populated by immigrants that has risen to become one of the most innovative and prosperous countries in the world.”

Connecting the people, businesses, cultures and economies of the world to Houston and the region also included traveling to the Palestinian territories. The delegation visited with the mayor of Al-Bireh about infrastructure, walked through the Al-Amari refugee camp and toured a clinic which sees 300 patients a day. The group also met with the founder of the growing city of Rawabi.

During the mission, Mayor Turner and the delegation also met with local Israeli entrepreneurs who are doing business in Houston.  A new alliance was also announced between MD Anderson Cancer Center and Israeli company Convergent R.N.R. which will develop new radiation technology. More partnerships and alliances are on the horizon in the fields of cyber security, life sciences and tourism.

“The trip to Israel was one of the most educational missions that I have ever attended,” said Senior Vice President of Tourism Jorge Franz. “It allowed me to get a fresh perspective on the whole Middle East region that can help our organization in future business dealings there.  Most importantly, the trip allowed us the opportunity to meet with the CEO of the Tel Aviv Global City initiative and the director of tourism for the Tel Aviv Convention and Visitors Bureau.  Both provided great ideas and contacts that we can put to work here in Houston to attract more visitors to our city.”

“We’d be delighted to see new air service between Houston and Israel,” said Saba Abashawl, chief external affairs officer of the Houston Airport System.  “Our mutual business connections are growing, especially in the energy and medical industries, as well as in technology and logistics. Tourism is also growing, and we believe that when combined with business growth, this expansion can serve as the foundation for a strong traffic base.”

Houston and Israel have a shared belief that innovation, creativity and progress require positive leadership, thoughtful inclusion of our citizens, discipline and hard work. The delegation came away with a renewed sense of purpose and optimism for the future of Houston knowing that we have all the resources and people to improve our great city.

For more information on the mission and the results, see the links below: