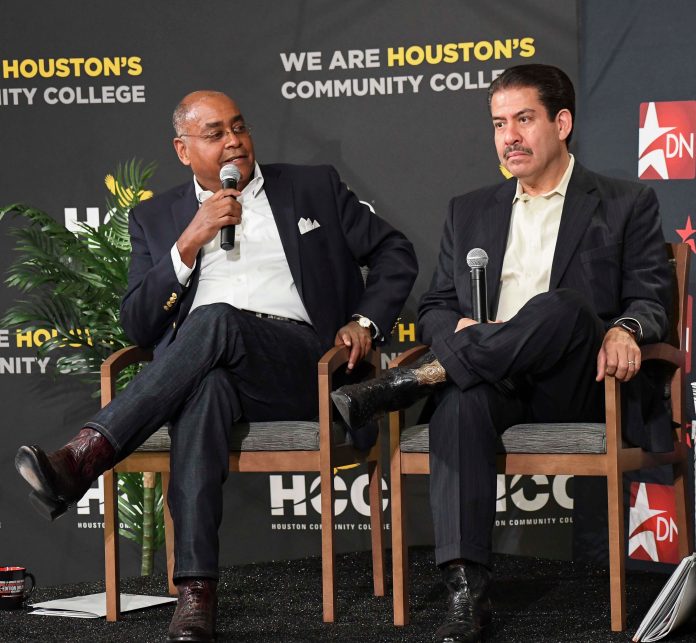 Harris County is the third largest county in the United States with more than 4.5 million people. Hispanics and African-Americans combined make up 61 percent of its population, and Harris County Commissioners Rodney Ellis and Adrian Garcia are working to ensure that Blacks and Browns have a voice.

Ellis and Garcia addressed the relationship between the two groups and the concerns of their constituents during the Defender’s Conversations & Coffee series, “Blacks & Browns: Common Ground.”

Ellis and Garcia discussed a number of subjects, including recent chemical plant explosions and the 2020 Census.

Defender: How is Harris County going to address the problem of chemical plant explosions in East Harris County?

Garcia:Judge Lina Hidalgo, for all the conversation that has been had about her youth and inexperience, did a phenomenal job with the ITC fire in Deer Park. I just met with some of the refineries and had about 30 people in my office talking about what needs to happen.

We have had four fires within three weeks – Exxon-Mobil, ITC, KMCO and then we had a lightning strike that was contained very rapidly. For years I heard this phrase “environmental racism” and I didn’t really know how to digest that. But after ITC, I get it. And I would just say that the industry has created jobs and contributed to the economy, and is vital to our participation in the global economy. However, none of that is permission to make people sick.

This has forced us to revisit how we co-exist together. We are going to have to make a more significant investment in air monitoring, because if not for Judge Hidalgo’s leadership, we would have still been scrambling to understand who’s measuring what, is it this or that, and where is it, and she put all of that together in the readyharris.org system.

It also leads us into a conversation about the industry. We learned that the industry is only required to have enough foam to fight one tank fire for 65 minutes. Thankfully this was an accident and not a terroristic event. We have a lot to do, a lot to learn, but I want to make sure people are clear. We’re not trying to shut any refineries down unless you are just a bad, bad actor, but we have to be willing to sit down and talk to each other.

Ellis:Here is part of the problem – good faith has meant industries having a good time; that’s what it has amounted to. The federal and state governments have been asleep at the switch and on the local level they took away our power. We are the energy capital of the world. Those petrochemical companies are why all of these jobs are here. They have been getting away with good faith having a good time.

Garcia:Had not ITC happened, I wouldn’t have learned that there three bills [in the Legislature] that would continue to effectively gut the county’s power and authority against the industry in these types of events.

Defender: The 2020 Census will influence the next decade for Blacks and Browns, especially in Texas. What is the county planning to do to confront the undercount some are predicting?

Garcia:The county has already filed an amicus brief opposing the insertion of an immigration-related question in the Census. Recently, the state of Maryland effectively blocked the president from getting that question inserted. It brings us back to the fact that we have to make sure that we’re talking to others who look like this room to ensure that people participate in the Census process and do not run and hide.

Ellis:The Census is so that we know how many people are in this city, in this county, in this state, in this county. It’s important because we draw down federal dollars based on the number of people we have, whether you are a citizen or not…I am going to go out and tell people as much as I can to be counted.