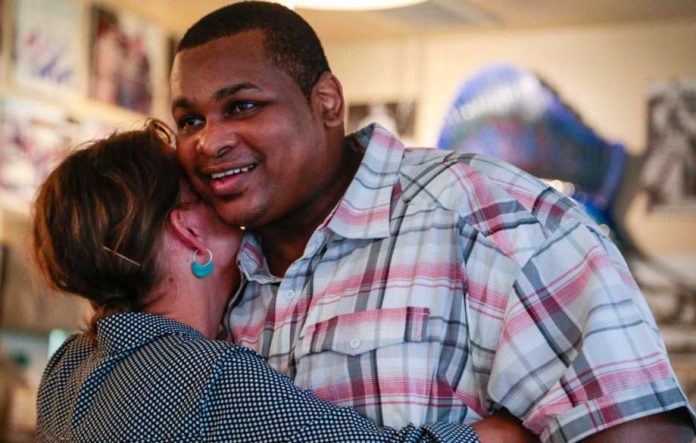 Time is running out for Alfred Dewayne Brown.

This time, mercifully, the clock is not ticking toward an execution date. It is inching toward the June 8 deadline to qualify for state compensation for the 12 years he lost behind bars due to a wrongful murder conviction.

But something tells me that won’t be the case. All the evidence I’m aware of points to Brown’s innocence. And that should lead to his fair compensation, if it’s not too late.

The statute of limitations started running nearly three years ago, when Brown walked out of the Harris County Jail, all smiles as he greeted family and TV news crews following the dismissal of the capital murder charge against him.

A year earlier, the state’s highest criminal court had thrown out Brown’s conviction and death sentence in the 2003 murder of Houston Police Officer Charles R. Clark, largely because prosecutors violated his rights by failing to disclose evidence, a phone record, that supported his alibi.

Former District Attorney Devon Anderson declined, after a lengthy re-investigation, to retry Brown for lack of evidence, but police union officials maintained Brown was guilty, and Anderson did not call for an investigation to determine whether he met the legal standard for “actual innocence.”

That standard is roughly similar to the one that led the Texas Criminal Court of Appeals to toss Brown’s conviction due to constitutional error. An inmate must show that the constitutional error at trial “probably” resulted in the conviction of one who is actually innocent and that no reasonable juror would have voted to convict in light of the new evidence.

That new evidence included the phone record, found years after trial in a homicide detective’s garage, that substantiated Brown’s claim that he was at his girlfriend’s house the morning of the murder. Prosecutors acknowledged violating Brown’s rights by failing to disclose the phone record, but claimed it was an inadvertent oversight. Recently, though, an email was unearthed showing that a homicide detective alerted the prosecutor, Dan Rizzo, to the phone record and the potential trouble it spelled for their case.

Since he was freed, the former death row inmate has been trying to get on with his life, pursuing a truck-driving career and patiently waiting for the last bit of justice.

So far, he hasn’t received one penny of the state compensation due him by law. In 2016, State Comptroller Glenn Hegar ignored precedent and, in my opinion, wrongly denied Brown’s initial petition because he didn’t have an official declaration of “actual innocence” from Harris County.

Ogg, who defeated Anderson in the 2016 district attorney’s race, can now make such a declaration. Some believed she’d do so quickly after taking office and grew frustrated as the case seemed to languish. Eventually, Brown’s attorneys filed a civil lawsuit against the county.

But on Tuesday, Ogg revealed that she planned to appoint a special prosecutor to review Brown’s case and determine whether he is “actually innocent.”

She chose Houston attorney John Raley for the massive undertaking. Raley, 58, is a respected civil lawyer best known for his pro bono legal work that helped the Innocence Project exonerate Michael Morton, who had served 25 years in prison on a wrongful conviction in his wife’s Williamson County murder. He also played a major role in the hard-fought exoneration of Hannah Overton, who served seven years in prison before she was cleared in the death of a 4-year-old foster child she and her husband planned to adopt.

Raley is well qualified for the job. He’s never been a prosecutor but he is tenacious and thorough, particularly when it comes to battling those in wrongful conviction cases who seem more concerned with reputation or legacy than finding the truth. That means you, former Williamson County District Attorney John Bradley.

“I am the son of a prosecutor and the brother of a prosecutor,” Raley told me. “I grew up watching it done with integrity. I still believe most prosecutors are very good people trying to keep us safe. I have no bias one way or another. I’m going to let the facts fall where they may and make a recommendation based on the facts.”

Yes, but can that be done in a month?