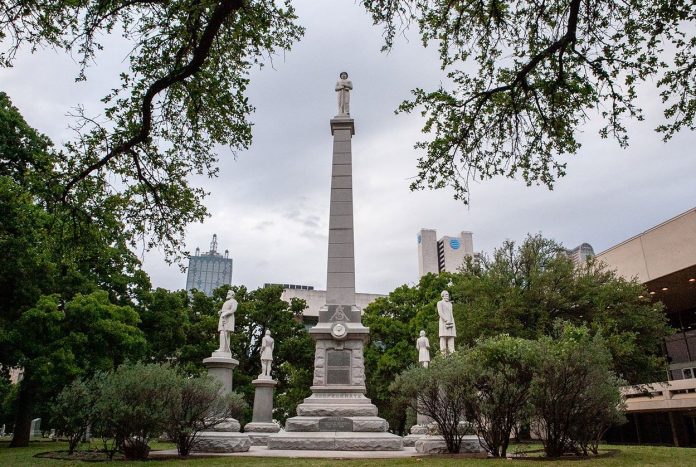 One by one, over 50 Dallas residents stepped up to the microphone at a city council meeting last week. In their one minute of allotted time, some remained calm about their opposition or support for the removal of the city’s Confederate War Memorial. Others were fired up  — one woman opposed to the removal called two city officials “snakes in the grass.”

There was a common theme among those against the removal of confederate monument: Don’t erase history.

Dallas — where a statue of Confederate General Robert E. Lee was taken down last year — has joined other Texas cities that have grappled over what to do with their cities’ Confederate symbols. For example, Austin last week decided to rename two streets named for Confederate leaders. Other Texas cities, including El Paso, have wrestled with the issue in recent months but have not taken significant action.

Confederate symbols take the form of schools, roads, monuments and county names across the state. Texas has the country’s fourth most Confederate symbols, behind Virginia, Georgia, and North Carolina, according to the Southern Poverty Law Center.

Austin City Councilman Greg Casar told The Texas Tribune he was proud of Austin for taking an important step.

“We must take down tributes to the Confederacy — from the streets in our cities, to statues owned by the State of Texas, to names of schools managed by our school districts — and take down policies that result in racial injustice,” Casar said.

In Dallas last week, the city council deferred a vote that would determine the fate of the Confederate War Memorial in downtown Dallas. The vote came after fiery testimonies from residents on both sides of the issue.

“Will we allow the ghost of the Confederacy to haunt this city forever?” one resident asked.

The council also voted at that meeting not to sell a statue of Robert E. Lee that was taken down last September. And members decided not to rename a handful of streets that are named after Confederate soldiers.

Kevin Felder, a black Dallas City Council member, said he was not for “destroying your history” but emphasized the pain African-Americans dealt with after slavery, including “lynchings, burnings and bombings.”

“Although slaves were freed, they were never really free,” Felder said.

North Dallas City Councilman Lee Kleinman said during the meeting he wouldn’t be the “white council member telling black council members what to do” in regards to voting for the removal of the monument.

At the same meeting, the Dallas City Council voted to create a memorial for Allen Brooks — a black man who was publicly lynched in 1910 in Dallas after he was accused of assaulting and raping a two-year-old. Brooks never received a fair trial after a mob dragged him out in the middle of his trial and hanged him from the second floor of the courthouse. His body was later hung from a ceremonial arch in downtown.

In Fort Worth, the conversation over Confederate symbols has been stagnant compared to Dallas. Jason Smith, a local attorney, has been pushing since August for the removal of a Confederate plaque in front of the Tarrant County courthouse. Smith previously took his fight to the Tarrant County Bar Association Board of Directors, which voted not to ask the county commissioners’ court to remove the plaque. Channeling his disappointment, Smith started a petition for the removal, which has over 640 signatures.

Despite the threatening messages Smith said he has received on social media for his efforts, he said he believes something should have been done — especially when his African-American clients were vocal about seeing the plaque when they entered the courthouse.

“A Confederate monument has no place in front of a building that promises justice for all,” Smith said.

Prior to the Charlottesville rallies, the Houston City Council voted to rename Dowling Street, named after Confederate officer Richard “Dick” Dowling, to Emancipation Avenue. There had also been debate over a Confederate statue at Sam Houston Park, but so far, the city hasn’t taken action regarding its removal. Houston Mayor Sylvester Turner has created a panel to study what to do with the city’s Confederate symbols, a spokesperson for Turner said.

In El Paso, there have been public discussions about renaming Robert E. Lee Road and Lee Elementary. But no one has filed an application to change the street name, according to the office of the city council member who represents the area. And though Superintendent Juan Cabrera supports renaming schools associated with the Confederacy, there has been no push to change the name of Lee Elementary, according to district spokesman Gustavo Reveles Acosta.

Dallas City Council will eventually have to make a decision about its Confederate symbols — one that may set the tone for other Texas cities.

“Everyone in America is watching the city of Dallas and saying, ‘Are we doing the right thing?” said Dallas City Council member Tennell Atkins.