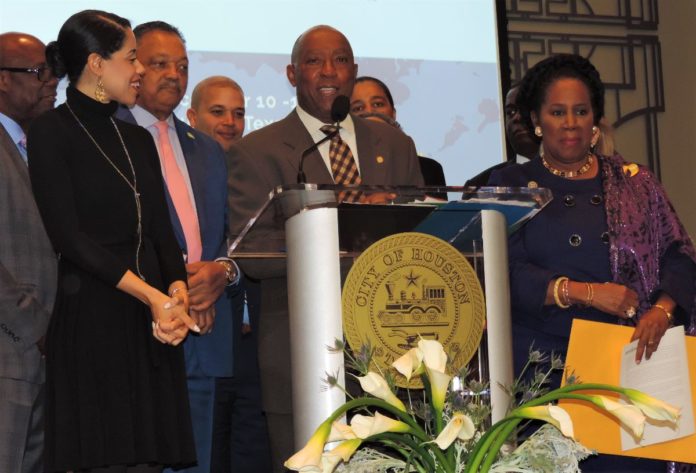 Houston recently hosted the Congressional Black Caucus Foundation’s (CBCF) fifth economic summit, “After Hurricane Harvey: Economic Lessons Learned.” The emerging theme was access to funding for a crisis that has not yet ended.

Cathy Hughes, CBCF board chair and chair of Urban One (formerly Radio One), said choosing Houston as the event host was intentional.

“Houston has been forgotten by major media, and Houston is one of the most important cities in the United States,” she said. “We thought it was important to come here and tell the story of those who are still in need, and hopefully help refocus the spotlight.”

Hughes said the fact that Houston is Roland Martin’s hometown played a part in the decision as well. Martin’s show, “NewsOne Now,” broadcast live from the event.

“The fight we’re having [in D.C.] is to ensure that the $44 billion that has been offered by the administration is not acceptable,” Jackson Lee said. “We’re standing as a delegation saying no, we need between $61 billion and $100 billion-plus for housing, transportation, the infrastructure, the fixing of the bayous.”

Mayor Sylvester Turner agreed that such funding was inadequate.

“If you only provide funding to get us back to where we were, then you’re providing funding for failure,” Turner said, alluding to consistency of flood-inducing storms in Houston.

Turner asked CBC lawmakers to urge the federal administration not to punish Houston for being smart and industrious regarding the relatively fast debris clean-up, and highlighted the continued plight of seniors in mold-infested homes, residents with no insurance or FEMA funds, and small businesses lacking resources.

Both Carlecia Wright, the city’s Director of the Office of Business Opportunity and Courtney Rose Johnson, president of the Greater Houston Black Chamber, spoke to the needs of small businesses post-Harvey.

“When a small business closes, that affects all family members because that’s where the jobs are, and the actual income is coming from to rebuild,” said Johnson who quoted stats from the Small Business Association and FEMA that said respectively 25-40 percent of businesses impacted by natural disasters never reopen.

“I don’t know which number is the true number, but 40 percent and 25 percent is a lot. And we know as a Black chamber that that’s even more significant in our community because a lot of times our businesses start off more vulnerable.”

“We’ve introduced into the appropriations a $1 billion grant program to stand up the small businesses of Houston and those impacted by Hurricane Harvey,” said Jackson Lee.

Civil rights icon Rev. Jesse Jackson Sr. was on hand for the proceedings, as well, offering his insights.

“This is an ongoing crisis, with more crisis coming,” Jackson said. “The cameras have left but the problems have not. And before we get this one fixed another storm will soon be coming.”

Jackson called for a mass demonstration to let lawmakers know the $44 billion proposed is insufficient, and accepting anything less than the funds needed would be “accepting short-term pleasure for long-term pain.”

Turner, remains doggedly optimistic, pointing to the possibilities for collaborations between the City, faith communities, non-profits and businesses.

“I don’t know why the storm came, but I do know this is an opportunity to leverage the dollars that will be coming with the dollars that currently exist, not only to make our city more resilient when it comes to flooding but to build business economic capacity.

“Because at the end of the day, what will save us is putting people in a better position in their own lives so that they can take care of themselves and their families,” Turner said.