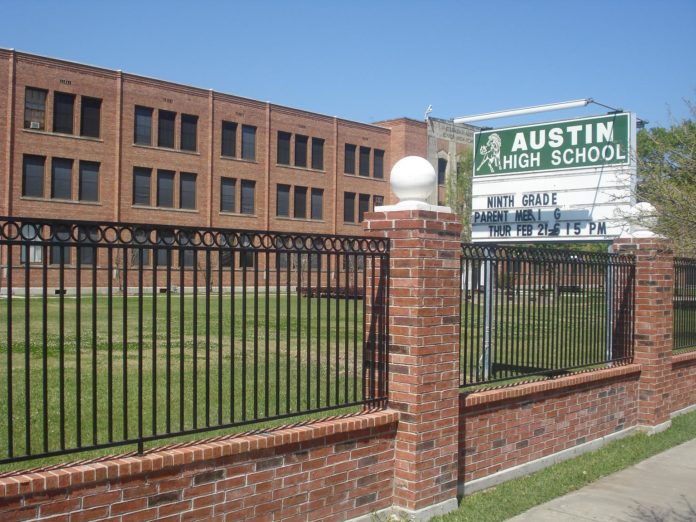 The Houston Independent School District Board of Education on Thursday will consider the construction contract for Austin High School, which is being rebuilt as part of the 2012 Bond Program.

If the contract is approved, it will mark a major milestone in the 2012 Bond Program with all projects moving forward with executed construction contracts. Another major milestone is expected in the coming months, with the district preparing to have almost half of all 2012 Bond schools and projects completed and open by summer 2017.

At Austin High School, plans call for a new facility accommodating 1,800 to 2,000 students. The interior of the building facing Dumble Street will be completely remodeled, but its exterior façade and historic entry will be preserved. Much of the remaining two-thirds of the campus will be torn down and replaced with a multi-story building for most of the school’s academics.

Plans for the campus include modern, open spaces allowing for lots of daylight, clusters of classrooms to allow for a neighborhood learning concept, improved traffic flow, and a new, defined entry off of Jefferson Street.

HISD trustees are expected to consider authorizing district officials to negotiate and execute a construction manager-at-risk contract with Pepper-Lawson Construction. CMAR is a construction delivery method that requires the contractor to commit to completing a project within a guaranteed maximum price (GMP).

HISD sought qualifications and proposals from new CMAR firms after terminating negotiations with the previous CMAR last fall. Though the GMP has not yet been negotiated with Pepper-Lawson, the total cost of the project is not to exceed Austin’s project budget, according to the agenda item.

Once work begins, construction is expected to take 24 to 30 months.