The Orange Show Center for Visionary Art is proud to announce the festivities surrounding the 30th Anniversary of the Houston Art Car Parade Weekend, the largest gathering of its kind in the world and one of Houston’s most beloved annual events. Over the past 30 years, the Houston Art Car Parade has grown from a small group of like- minded individuals making a statement on the streets, to a celebration of personal artistic expression, with 250 mobile masterpieces from across the country rolling through downtown Houston to hundreds of thousands of spectators. The four-day party, this year chaired by Tracy and Glen Larner, kicks off on Thursday, April 6th with the Main Street Drag and Sneak Peek at Discovery Green on the Avenida, it continues Friday, April 7th with The Legendary Art Car Ball, and culminates on Saturday, April 8th with the main event – The Houston Art Car Parade – taking over Smith Street in Downtown Houston. Over $10,000 in prize money will be awarded to artists in various categories the following day, Sunday, April 9th, at the Houston Art Car Parade Award Ceremony at Smither Park.

Texas Southern University’s own Ocean of Soul will lead the parade with their signature sound, heavy beat, precision drills, and intricate dance routines. Ocean of Soul has performed across the country in high profile events including the halftime show of Super Bowl XXXVIII and TSU alumnus Michael Strahan’s Pro Football Hall of Fame induction ceremony.

Orange Show Center for Visionary Art is honored to have as the Houston Art Car Parade Grand Marshal actor, director, comedian, author, and Chicano art collector Cheech Marin. Best known as one half of the irreverent, satirical, counter-culture, no-holds-barred duo Cheech and Chong, Marin is a paradox in the world of entertainment and widely acknowledged as a cultural icon. Beyond his acting career which includes individual appearances in over 20 films including Tin Cup, Desperado, From Dusk Til Dawn, and Once Upon A Time in Mexico, television roles in Nash Bridges, Lost, and Jane The Virgin, and voice work in the Disney animated children films The Lion King and Cars franchise, Marin contributes time and energy to promoting Chicano art. Since the mid-1980s he has developed the finest private collection of Chicano art in the United States. Marin will be in Houston all weekend to lead the parade and promote his memoir “Cheech Is Not My Real Name… But Don’t Call Me Chong!”

The 30th Annual Houston Art Car Parade icon and graphics were designed by artist and designer Jermaine Rogers, whose career includes designing posters for a wide variety of musical acts including Tool, Deftones, Radiohead, Tori Amos, David Bowie, The Cure, Neil Young, and many others. His work is cataloged among the permanent collections of the Rock & Roll Hall of Fame in Cleveland, OH and the Experience Music Project in Seattle, WA. Commemorative posters will be available for sale along the parade route and at each event surrounding the 30th Annual Houston Art Car Parade Weekend.

An important aspect of the Houston Art Car Parade each year is the educational outreach opportunities and recruiting schools and youth groups to participate. For the 30th Anniversary, the Houston Art Car Parade will feature more youth-related entries than ever – a total of 27 – featuring creations by elementary, middle, and high school students under the instructions of their art teachers and mentors. In addition, Lowriders and SLABs will make appearances in this year’s parade, showcasing two of the most notable car-cultures represented in Houston. Artists from across the country, Canada and Mexico, will descend upon Houston during the weekend, presenting a wide array of entries, from bike and skater groups to musical performances, artistic contraptions, painted vehicles, political statements, and more. 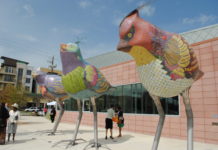 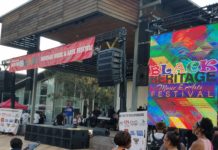