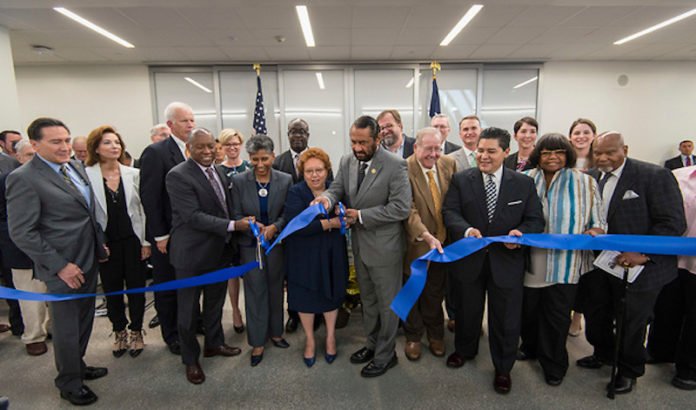 More than 300 students, teachers, parents, and medical center community members converged on the Texas Medical Center on Thursday to celebrate the dedication of the new DeBakey High School for Health Professions.

Columns of blue and white balloons flanked center stage and music from the DeBakey orchestra filled the five-story atrium as attendees took their seats, eager to celebrate the school’s opening and tour the new facility.

DeBakey teachers and administrators moved into the new building over the Memorial Day weekend in time to start summer school on May 31.

“Looking at the impressive features of this new school, anything seems possible now,” HISD Board of Education Trustee Mike Lunceford said as he looked out at the crowded atrium. “I have no doubt that this school will produce some of the most brilliant scientist minds in the field.”

DeBakey was founded in 1972 in partnership with Baylor College of Medicine as the first health-focused high school in the nation. It continues to serve as a model for school districts and medical centers across the country, and is ranked by U.S. News & World Report as one of the top 20 high schools in the nation.

Through its rigorous college-preparatory curriculum and hands-on practical health-field experience, the school offers students interested in science and health careers an alternative to the traditional high school experience.

“We have one of the preeminent high schools, not only in the state of Texas, but in the United States of America,” HISD Superintendent Richard Carranza said. “Let the learning begin.”

Accommodating up to 1,000 students, the 194,000-square-foot building features a ground-floor dining commons that opens up to the five-story atrium, a large multipurpose room, and a college center. Located on the top floor are a gymnasium, fitness center, black box theater, and music room to be used in conjunction with the Texas Medical Center Orchestra.

A rooftop outdoor space and terraces on each level help make up for limited ground space at the new site.

“You cannot have a successful, productive city without having quality education,” Mayor Sylvester Turner said, explaining the importance of the new building to the city. “When you have a well-educated workforce, the city of Houston will prosper.”

During the ceremony, the DeBakey family presented the school with a bust of the school’s namesake — Michael E. DeBakey, who posed for the sculpture shortly before his death in 2008. Principal Perry presented DeBakey family members with framed photos of the new building.

DeBakey parent Meredith Bryant was among the hundreds of people who gathered in the atrium to participate in the celebration. She said she was so excited about the new building that her son will soon attend, that she already has visited it five times.

“It’s awesome,” said Bryant, whose son Jayden Bryant will be a junior at the new school next year. “The kids have a big opportunity here.”

Jayden, an aspiring orthopedic surgeon, said he is excited about the building and remembers the first day he walked through the doors.

“It was amazing,” Bryant said, grinning. “I’m excited about being part of something big.”

DeBakey is among 40 schools, including 29 high schools, being rebuilt or renovated as part of HISD’s 2012 Bond program. Active construction is underway on roughly three dozen campuses — more activity than at any other time in district history. Almost half of the schools in the program will be complete and open to students by the end of this summer. Once all work is finished, the district will boast of one of the most modern portfolios of urban high schools in the country.