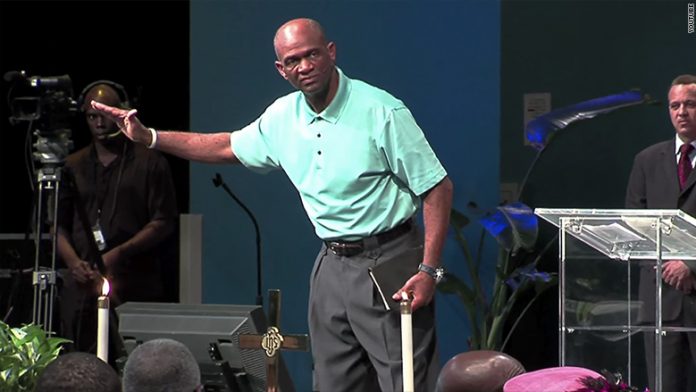 When Windsor Village United Methodist Church pastor Kirbyjon Caldwell first got word that a federal grand jury was indicting him for bilking investors out of more than $1 million, he went “numb.”

Caldwell had spent the last 36 years working in the Houston community, dedicating his time, money and energy to helping others. So the idea that he would suddenly pivot and try to take advantage of people was disheartening.

But that’s exactly what federal officials in Louisiana said the megachurch pastor did. Caldwell, along with Gregory Alan Smith are accused of wire fraud, money laundering conspiracy to commit those two offenses. According to the indictment, Smith used his influence as operator and manager of Smith Financial Group LLC in Shreveport, and Caldwell used his influence as pastor of a prominent Houston church to lure investors to pay more than $1 million for Historical Chinese bonds.

“These bonds were issued by the former Republic of China prior to losing power to the Communist government in 1949,” prosecutors said in a news release. “They are not recognized by China’s current government and have no investment value.”

And instead of investing, prosecutors say the pair “used them to pay personal loans, credit card balances, mortgages, vehicle purchases and other personal expenses,” the release states. If convicted, Caldwell and Smith face up to 30 years in prison.

According to the complaint, the investors’ faith in Smith and Caldwell was a major factor in procuring the funds for the bogus bonds.

“Although many investors did not understand the investment, they ultimately trusted Smith and took comfort in the fact that a high-profile pastor was offering the investment,” the complaint states.

Caldwell – who plans to surrender to Louisiana authorities in the coming days – calls the allegations a “painful pit stop.” He sat down with the Defender to address the allegations.

Defender: What did you think of the indictment when you first heard of it?

Kirbyjon Caldwell: I was absolutely shocked and numb because I hadn’t done anything wrong. A, the bonds are legitimate, they’re not fraudulent. I have evidence to support that, lots of it. B, the bonds have value, I have evidence of that as well. Thirdly, everyone who has asked for his or her money back got it, in full, in a very timely manner. One might ask why would someone ask for their money back. The answer would be because the process of the sell is taking a lot longer than I anticipated.

Defender: An indictment has even greater weight when it is filed on a federal level, explain the charges you’re facing: Defrauding investors and misrepresenting yourself.

Caldwell:First of all, I didn’t know any of the investors when this process began. They were chosen by another person. In a few instances, I was placed on the phone. I shared with them documentation I had in my hand, which supported my reason for thinking the bonds could be purchased. Based on that, they had a level of comfort and they went forward. And of course, there was always the safety net of getting your money back. As for misrepresenting. – I didn’t even present myself to any of the investors

Defender: What upset you most about the accusations in the indictment?

Caldwell:The accusation that I took advantage of older people First of all, I didn’t approach any of the investors in Louisiana. Everyone who has wanted his or her money back has gotten it. There have been 2 or 3 cases where investors in their 50s, 60s have needed money but did not want to get out of the deal. So what did I do? I advanced them the money, I loaned them the money. That has happened on multiple occasions. That’s how much confidence I had in the deal. That’s how much I did not want anyone to ever think that they were being abused. That was the furthest thing from my mind. I followed up with

Defender: Some people say this indictment is a confirmation of the greed of mega church and a reason they don’t attend large churches or churches at all.  What’s your response?

Caldwell:Greed comes in all sizes. In this particular case, the motivation was not greed. The motivation was to provide funding for a fairly substantial humanitarian project. That is still our mission. It’s still on the table. I would say persons who don’t want to attend a church can come up with a lot of different reasons

Defender: What do you want the community to know about you and the indictment filed against you?

Caldwell:I am innocent. I would also want the community, particularly the Christian community to know how deeply I regret this process. The negative publicity that I’ve gotten, which I’m told has caused some other folk to take some flak, who are believers are well. At this point, it’s real. But the end is not here yet.

Windsor Village United Methodist Church has a congregation of more than 16,000, to say many of them were shocked by the recent charges is an understatement.

Pastor Kirbyjon Caldwell is known and loved by so many, so news of the indictment is shocking and to some, unbelievable. Despite the charges, many of those members are sticking by him and showing their support.

“I don’t believe one iota of any of it because I know my pastor. I’ve been there for 33 years. I’ve seen him do nothing but good for people. I’ve seen him pray for people when he could barely hold up himself. It’s too much good in him. Everyone who knows him knows there is not a bad seed in him anywhere. We have to pray and stand behind the man who has stood by us.” – Dorothy Cook

“Anyone who knows our pastor, knows he’s a man of integrity. The same man that during Hurricane Harvey, spent every day at the Kingdom Builder’s Center making sure needs were being met. I tell people to keep praying and lifting him up.” –Ray Bady

“Kirbyjon Caldwell is the number one ethical preacher in this city and we are all in for him. All in. That’s our tune now is all in.” -Howard Jefferson

“He’s everything. He’s a leader, he’s a supporter, and he’s an encourager. He prays for us. He covers us. So in return, that’s what we’re doing for him.” -Sherrie Barrett.