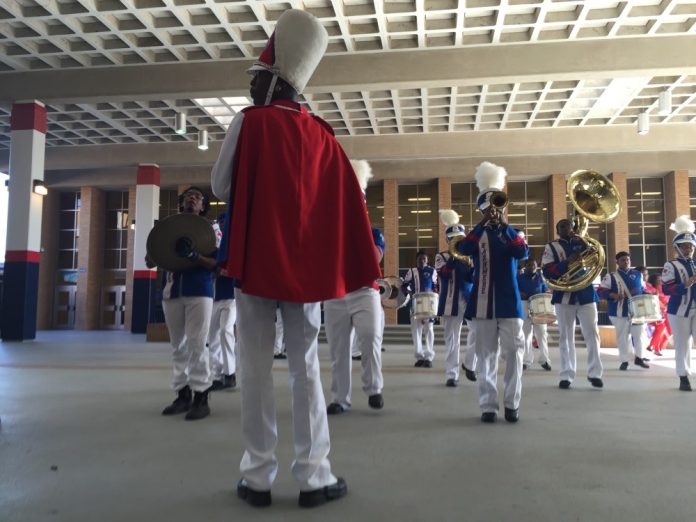 For over a decade, Kashmere High School in Northeast Houston has been on the state’s list of struggling schools that must improve. But that’s expected to change this summer.

Houston school board member Rhonda Skillern Jones said that preliminary test scores indicate Kashmere High is poised to get a passing grade when the state releases official ratings in August.

It’s a huge win for the school, which the Texas Education Agency has rated as “improvement required” longer than any other campus in the state. Kashmere High is one of four schools in the Houston Independent School District that must improve this year or the rating could trigger steep state penalties, including state-appointed managers to run the entire Houston school district.

“We’re ready to celebrate as a community because this has been 11 years in the making,” said community leader and alum Keith Downey. “Let’s get those results out so the community can not only celebrate but the parents can feel better and can increase enrollment as well.”

Downey says he credits the turnaround to keeping strong teachers, putting tutors in the classroom and giving more support to students in and outside of school. Downey helped found a community council to support Kashmere High and other schools in the neighborhood, with a particular focus on wrap-around social services.

“It will bring out the pride in the school, in the students, in the community, in the alumni,” Downey said. “But understand we still have much work to do.”

While Kashmere students have improved in math, their reading scores still lag below average.

Principal Reginald Bush, who successfully turned around Kashmere Gardens Elementary, says he’s already planning for next school year. Bush says by the first week of school, all students will have had a chance to read and give feedback on the school’s continued turnaround plan.

“In a nutshell, the school improvement plan will be a working document at all times,” he said.

Bush says he expects to see “tremendous growth” in the state’s school accountability system. One driver behind that: celebrating small successes during the year. The principal says they asked students how they wanted to celebrate — that turned into field trips, crawfish boils, pep rallies and fish fries. Bush also says another key ingredient has been teachers coming together and using data to improve instruction.

“They really, really pushed the needle,” Bush said. “By far the human, making sure we can build strong relationships with students and having the students goal set – that was really big this year.”