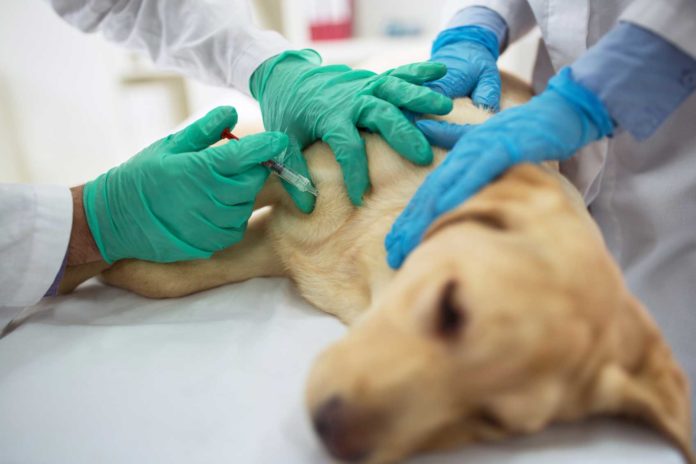 Many dogs love to socialize. They enjoy playing with furry buddies in the neighborhood and at daycare, romping at dog parks and sniffing each other when meeting on a walk. Socialization is good for dogs, according to local veterinarian Dr. David Buelna of Circle B Veterinary Hospital, but it also causes exposure to illnesses such as canine flu.

“Canine flu is a serious and highly contagious respiratory disease requiring veterinary supervision,” Dr. Buelna says, “because it may lead to pneumonia. But the good news is that canine flu may be prevented by vaccination.”

Many symptoms of canine flu are similar to those of kennel cough, which include fever, lethargy, a runny nose and eye discharge. Canine flu may also produce a dry cough that sounds like a goose honking, or a wet cough.

Sneezes, coughs and toys that dogs share may all spread canine flu. Its treatment depends on a pet’s general health and whether bacterial infection occurs. Dr. Buelna notes that it may last from about 10 to 30 days.

Two forms of the influenza virus cause canine flu. One is H3N8, which first appeared in the U.S. in 2004, the second, H3N2, is related to a bird flu virus that may have originally developed in Asia around 2006. In the U.S., the first reported cases of H3N2 occurred during a 2015 outbreak in Chicago.

Vaccines for canine flu have been recently developed, particularly H3N2, for which a vaccine wasn’t available until late 2015. These vaccines are available at Circle B Veterinary Hospital located at 1443 FM 1463, Suite 200 in Katy, Texas.

Most dogs who come in contact with canine influenza, which can remain infectious for up to 48 hours on surfaces, will contract the virus. Dogs that lead what veterinary medicine calls “social lifestyles” — such as spending time in kennels, doggie daycare or dog shows – may benefit from vaccination to ward off the duration of canine flu and decrease the severity of their symptoms.

Also, Dr. Buelna warns, “Coming down with H3N8 flu doesn’t protect a dog against the H3N2 virus and vice versa.” If a veterinarian determines that the vaccine is good option, the dog will need separate vaccinations for each strain of flu.