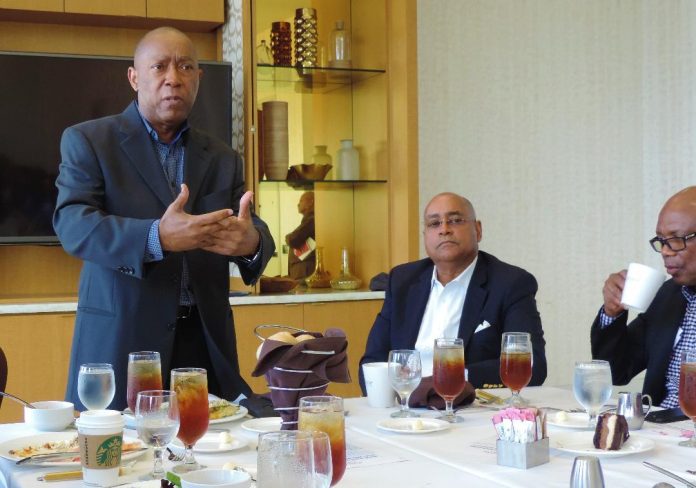 Under the banner, “Promises Made, Promises Kept,” Houston’s Mayor Sylvester Turner met with members of local media for an open discussion on his administration’s work thus far, and his thoughts on this fall’s mayoral election.

Turner pointed out that he made good immediately on his inaugural speech promise to confront the city’s enormous potholes situation. However, when discussing his passion for continuing his efforts to meet the challenges faced by all Houstonians he stated, “It’s not about potholes in the street, it’s about potholes in people’s lives.”

Turner, who has been part of countless election bids over his decades as an elected official at the state and city level, said this fall’s mayor’s race will be his last time running for any office, adding, “This one is personal. It’s about changing people’s lives.”

Making the case for his ability to change lives, he outlined his accomplishments, beginning with his greatest.

“A signature item was building Complete Communities; neighborhoods that have been underserved and under-resourced for decades,” he said, adding that the challenge is “transform[ing] these communities for the better without gentrifying.”

The five current Complete Communities are Third Ward, Second Ward, Near Northside, Acres Homes and Gulfton. Turner will announce four additional communities in the next month.

“If we don’t make them attractive for people who’ve come out of these communities then your political power structure ends up in Pearland, Katy and all these other places, and we create a political vacuum in our city.”

Though many nationally point to Turner’s handling of 2017’s Hurricane Harvey and the Tax Day Flood that greeted him just months into his first year, he argued his solving the city’s 20-year pension problem as equally important.

“The [pension’s] million dollars a day liability, that was wiped out, and all three credit rating agencies have given us a thumb’s up,” said Turner. “People can easily forget, on the pension issue when I came in everyone said it hadn’t been done. It’ll destroy the city, put us in bankruptcy…[We] end up getting it done in the first year-and-a-half of our administration, and then all of the sudden [some say] was not a major issue.”

Turner also mentioned successful efforts to reduce the number of Houston homeless by housing over 6,000 since 2016; Houston’s record number of MWBEs; the building momentum to build an amusement park; the city’s Turn-Around program for hard-to-employ individuals; and his Youth Summer Jobs Program.

Regarding the upcoming mayoral race, Turner said he’s running not for himself, but for future candidates that look like him.

To mayoral candidate Tony Buzbee’s inference that candidates shouldn’t take campaign contributions, Turner responded, “So, if the only way we can be on city council, county commissioner or mayor is to write a personal check to get there, then most of us, we may as well sit down. So this race is not just about me, this is about who the future leaders of this city need to be. And it would be a mistake on my part to not run a vigorous campaign, and then somebody else win, and I cut off the bridge of others like me crossing over to be where I am today.”