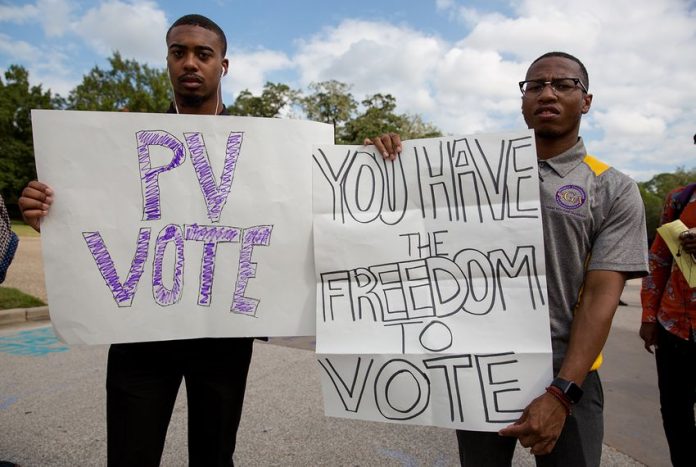 An intense political back-and-forth over the validity of voter registrations of thousands of students at a historically black university has been resolved, but community advocates say significant voting barriers remain for students at Prairie View A&M University.
Waller County, outside of Houston, quickly drew allegations of voter disenfranchisement after local Elections Administrator Christy Eason said recently that thousands of students who live on campus at Prairie View A&M had been incorrectly told to register to vote using an address in a different precinct and would need to fill out a change-of-address form before casting a ballot.
Democrats quickly challenged the additional paperwork requirement, saying it would suppress voter turnout at the university where about 80 percent of the students are African-American. A day later, the controversy drew national attention after a staffer working for Mike Siegel, the Democrat challenging U.S. Rep. Michael McCaul, R-Austin, was arrested and charged with failure to identify, a Class C misdemeanor, while trying to deliver a letter to the Waller County Courthouse that challenged the new change-of-address form requirement for the students.
By late Friday, Texas Secretary of State Rolando Pablos had announced that “no change of address form or statement of residence will be required prior to voting” for the students. He also said there will be election inspection officials at the polling location on campus to ensure “that no students will be impeded, hampered, or otherwise delayed in exercising their constitutional right to cast a ballot in the upcoming General Election.”
But Denise Mattox, president of the Waller County Democratic Club, called the new rules a “treatment” but not a full-fledged “fix” for the voting barriers facing many Prairie View A&M students. She said the real problem is that students do not have their own mailing addresses on campus.
The university does not have individual mailing addresses for students, so students have traditionally been instructed to register to vote using one of two shared campus addresses — 100 or 700 University Drive — per a 2016 agreement reached between the university and the county. However, the 700 University Drive address is not in the same precinct as the campus. That placed a number of students’ voter registrations in question for the upcoming election.
Mattox said she faults the university for not “telling the students where they live” and county officials for “keeping everyone in confusion” and “basically suppressing the vote.”
On Facebook, Prairie View A&M posted a statement defending its efforts to keep the address issue from blocking anyone from voting.
“PVAMU administrators and student leaders have been working diligently with county officials to ensure that students have the correct addresses to submit when registering to vote in the upcoming mid-term elections,” the statement said. “Rest assured, advocacy for elections and constitutional rights is a bedrock principle for PVAMU. We will always fight to have our voices heard. We understand the importance of students fulfilling their civic duty and will continue to work with officials across Texas to make sure that voting rights are protected during this important election season.”
Waller County and Prairie View A&M students have a long history of clashing over voting rights. In a 1979 voting rights case that went to the U.S. Supreme Court, the court affirmed students’ rights to register to vote at their college address even though county officials claimed the students were not residents. Despite that ruling, Waller County district attorney Oliver Kitzman claimed in 2004 that Prairie View A&M students could not vote because they did not meet state residency requirements, prompting students to march in protest. He later backed down. The campus did not get a polling place until 2013.
Lisa Seger, a Democrat running against state Rep. Cecil Bell Jr., R-Magnolia, said she was pleased by the secretary of state’s decision but stressed that there was a larger problem: “We don’t treat the student population like residents.”
Seger said that the students’ access to voting has been “problematic forever.” She echoed Mattox in saying that the use of shared mailing addresses tends to disenfranchise student voters. She also noted that the students are further discouraged from voting because early voting on campus does not last as long as it does in other places.
“You would think we’d be able to figure out how to make this easy for the students,” Seger said. “But nobody’s ever wanted to make this easy.”
Waller County commissioners are expected to consider a recommendation from Eason to add additional early voting locations and times on campus, according to a statement released by the county.
“For those trying to paint Waller County in a certain light, the truth is that we have worked very hard to protect and expand the voting rights of students at PVAMU, and we will always remain committed to that endeavor, regardless of what anyone else tries to portray,” Waller County Judge Trey Duhon wrote in the statement.
The statement also said that all students using the 100 or 700 University mailing addresses will be allowed to vote in either of the precinct locations and that additional poll workers will be available to help students correct their addresses after they cast their ballot. Additionally, Waller County officials plan to hold an “Address Correction Drive” on campus for students to correct their addresses before Election Day if they want, according to the statement.
Alisha Lowe-Scott, who works in the Student Engagement office at Prairie View A&M, said she supports any measure that increases voter turnout among students.
“Our biggest concern is making sure our students are allowed to vote,” Lowe-Scott said. “If this is going to allow them to get through the line faster, that is wonderful.”