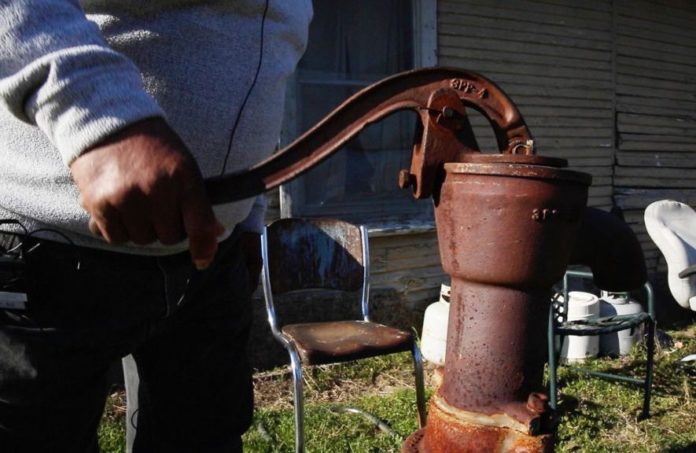 Sandbranch, Texas, a small unincorporated community in Dallas County, has been fighting for over 30 years to have access to clean running water, but between the machinations of the Federal Emergency Management Agency and Dallas County officials, the community continues to go without this most basic and critical of human rights.

Sandbranch is located 14 miles southeast of Dallas, the fifth-wealthiest city in the United States of America. Established in 1878 by the Rev. Allen Hawthorne, a formerly enslaved black man from Louisiana, along with 11 other freedmen, the community grew around its beating heart, Mt. Zion Baptist Church. The church continues to be the core of this tight-knit community to this very day.

At its peak, Sandbranch’s population numbered approximately 500 people, but today, about 80 people remain, loving and supporting each other through a humanitarian crisis that exists beneath the radar of most people in the United States.

According to a 2014 report from the Hunger Center of North Texas, 87 percent of Sandbranch residents are black, 10 percent are Latinx and 3 percent are white. The average age in Sandbranch is 68. All residents live below the federal poverty threshold, with the average income for lifelong residents holding at $721 per month and $1,426 for longtime residents.

Sandbranch is also in a food desert, which means residents—many without transportation—must find a way to travel more than 7 miles to the nearest grocery story for healthy food options.

Sandbranch has never had running water in the entire 138 years of its existence, but up until the 1980s, people in the community used well water, which has now either run dry or is too contaminated to drink.

Dallas County officials claim bacteria from hogs and other livestock is the reason for the contamination—and they’ve killed off the farm animals in an unsuccessful attempt to solve the problem. However, the residents lay the blame fully on the Southside Wastewater Treatment Plant, a high-tech, state-of-the-art water-treatment facility approximately 50 feet away from Sandbranch. If you speak to residents in the community, they will tell you that they’ve always had hogs, but that their water issues didn’t arise until the wastewater facility was built next door.

Today, residents depend on donated water or water purchased in nearby cities and then hauled to Sandbranch, or they share water with their neighbors. This may seem inconceivable, but to understand how things got this way requires a long, winding trip through the red tape of bureaucracy, and a recognition of the devaluation of black lives.

A Community in Crisis

In 1991, the city of Dallas refused to annex Sandbranch, citing high cost—$6.8 million for flood protection, $4.2 million for water/sewer service, with an estimated $24,000 revenue for the city. According to the document “Dallas County and Sandbranch: Efforts to Improve an Unincorporated Community (1985-2008),” the sporadic off and on efforts to bring water to Sandbranch continued until a discovery in 2003 derailed all plans entirely.

In January of 2003, FEMA declared Sandbranch to be in the Trinity River floodplain (pdf). Residents were given 30 days to bring their homes in compliance with FEMA regulations. The options they were given included: 1) building a levee around the community; 2) elevating structures above flood levels; 3) moving their homes to another location; or 4) demolishing their homes.

This task proved difficult for many residents, so in 2005, Dallas County devised a buyout plan that would pay Sandbranch residents for their property and help them relocate. Formally called the “Dallas County Optional Sandbranch Relocation Assistance Program,” the initiative involved Dallas County deducting the cost of demolishing property, leaving residents with an estimated $350.

Attorney Mark McPherson, who is representing Mt. Zion Baptist Church and the citizens of Sandbranch pro bono, called the move “nothing short of a government housing grab that duped vulnerable citizens into giving up their mortgage-free homes for a pittance.”

To add insult to injury, as all of this was occurring, the mostly elderly residents of Sandbranch remained without water. And with more and more residents being forced from their homes, Dallas County decided it was no longer economically feasible to bring clean, running water to the small community that remained.

Since 2014, Project DreamHaus, a nonprofit organization founded in 2001 by the Rev. Eugene and Deanna Keahey with a mission to “help the underserved become self-sufficient through education, economic awareness and strong community development,” has been pivotal in helping the residents of Sandbranch maintain a decent quality of life.

Keahey, who became pastor of Mt. Zion Baptist Church in 2013, spearheaded the “Sandbranch … Everybody’s Community!” grassroots effort organized by Project DreamHaus to bring water, sewage and social services to Sandbranch. Keahey has been on the front line since his arrival in Sandbranch, and has made local headlines this year as Dallas County intensifies its push to relocate Sandbranch residents instead of providing water for them.

“Flint, [Mich.,] has brown water and Sandbranch has no water,” Keahey told The Root. “We have kids with no water. We’re like a third world country, and I don’t say that loosely.

“The floodplain is a weapon that has been used against this community. We’re in what they call the 1 percent floodplain and that is the lowest floodplain in existence,” Keahey continued. “What that means is Sandbranch will potentially flood once every 100 years.