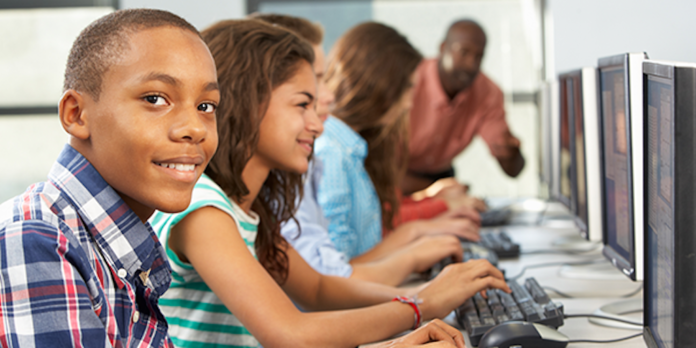 Now that students have left their classrooms for summer break, many of their old computers will be leaving also, only they won’t be coming back when school starts this fall. Over 3,500 obsolete computers at campuses across the district are being replaced this summer by Spring ISD’s technology staff.

“We had machines as old as 13 years in our schools, and we are really excited about getting these new computers for our students,” said Jeffrey Kohrman, information technology officer.

Kohrman visited Roberson Middle School as workers unloaded trucks of computers, monitors and keyboards to prepare them for assembly in the school’s cafeteria.  At Roberson, 227 computers are being replaced in nine classroom computer labs; once the teams finish the installations there, they will move on to the district’s 37 other campuses.

The new Dell computers are attached to the back of the monitor, so that they don’t take up space on or under the desks – a big improvement over the older models. This massive project is just one of the results of the Spring ISD 2016 bond referendum that was passed by over 70 percent of the voters in November of last year.

Benjamin Leung, director of technical support services, expressed his gratitude to the Spring community as he supervised the installation at Roberson. “This project is very critical for us as we make sure that our students get what they need to be successful. We really appreciate it, and our students will definitely appreciate it,” said Leung.