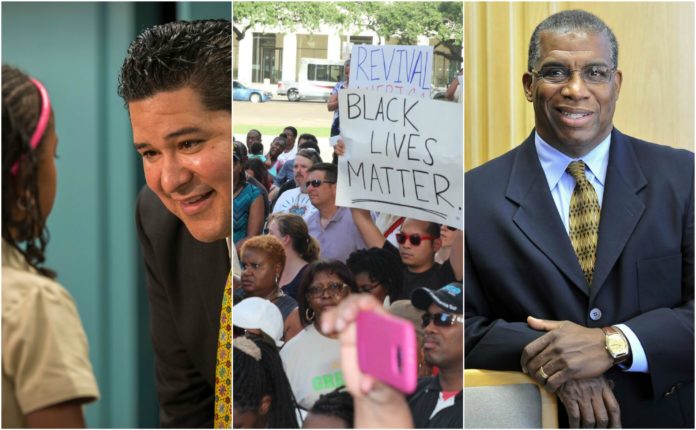 Houston experienced a year of change in 2016, including the inauguration of a new mayor, major changes in political power and new educational leaders. Here are the top 10 local stories that you read about in the Defender.

Mayor Sylvester Turner ushered in a new era of leadership during his January inauguration and said he envisioned Houston as a city of opportunity for all. His goals for the city included repairing potholes, managing costs and balancing the budget. He cited the need for more police officers and firefighters, quality neighborhood parks and stronger communities. Turner, a state representative for 26 years, became Houston’s second African-American mayor. He was sworn in with new Controller Chris Brown and 16 City Councilmembers, including African-Americans Amanda Edwards, Jerry Davis, Dwight Boykins and Larry Green. Former Councilmember Jarvis Johnson was elected to Turner’s state representative seat.

Richard Carranza, a lifelong educator who led one of California’s most diverse and high-achieving school districts, was named superintendent of HISD. He replaced Dr. Terry Grier, who had led the district since 2009. One of Carranza’s biggest concerns was the number of parents whose children were leaving HISD for charter schools. Carranza served as superintendent of the San Francisco Unified School District for four years, and led efforts to reduce student disciplinary suspensions. He is a former high school principal and teacher. HISD lauded Carranza for embracing values such as “graduating students who are globally aware, culturally competent and multilingual.”

In response to the July police killings of Alton Sterling in Baton Rouge and Philando Castile in Milwaukee, combined with the murder of five police officers in Dallas, concerned citizens marched through the streets of Houston. They called for love to replace hate, forgiveness to replace vindictiveness and justice to replace injustice. The rally was conceived by Community of Faith Bishop James Dixon II along with other faith leaders, elected officials, law enforcement and community leaders. “We are building greater trust and displaying greater resolve to be one city that is safe for all,” organizers said. Houstonians also protested the police shooting of a Black man, Alva Braziel. Though Braziel was armed, his death triggered scrutiny of the HPD body camera program because the officer wearing a bodycam did not turn it on until after the shooting.

Dr. Austin Lane became the 12th president of Texas Southern University in 2016.  He replaced Dr. John Rudley, who had served as president since 2008. Lane’s priorities for TSU included strengthening student recruitment, enrollment and retention. Lane had served as executive vice chancellor of Lone Star College since 2015 and was president of Lone Star College-Montgomery for six years.  He managed seven campuses in the system, with the smallest location educating 10,000 students. Before joining Lone Star he was vice president for student affairs at Tyler Junior College.

Mayor Sylvester Turner announced the appointment of Austin Police Chief Art Acevedo as the new Houston police chief, and El Paso Fire Department Chief Sam Peña as the new Houston Fire Department chief. Acevedo, who is the first Latino to lead the Houston Police Department permanently, filled the void left by the retirement of former Chief Charles McClelland. Acting Chief Martha Montalvo led the department in the interim. Acevedo, who emigrated to the U.S. from Cuba, began his career as a field patrol officer. Peña was the youngest fire chief in the 133-year history of the El Paso department.

While Democrats lost on the national level in the November elections, local races benefitted from the high Democratic turnout. In a first for Harris County, a Black woman will become tax assessor-collector after Ann Harris Bennett beat out Republican incumbent Mike Sullivan in his bid for re-election. In addition, former Houston homicide investigator-turned-City Councilman Ed Gonzalez edged out a victory in the race for Harris County sheriff in the race against incumbent Ron Hickman. In another hard-fought race, Democratic challenger Kim Ogg ousted GOP incumbent Devon Anderson to take control of the Harris County District Attorney’s Office.

A federal appeals court ruled that Texas’ voter identification law was discriminatory. The state later reached an agreement with the Justice Department and minority rights groups that weakened the voter ID law for the November general election. Under the new terms, registered voters without an ID could sign an affidavit certifying they were a U.S. citizen and present proof of residence. The overturned law required voters to have photo IDs and other strict identification requirements. Republicans said the law was intended to curb voter fraud. Democrats countered that the law sought to reduce turnout of minorities, seniors, college students and the poor.

As part of a new form of protest, supporting Black banks and businesses was promoted as a strategy for fighting injustice and police violence. Locally, Unity National Bank experienced an unprecedented rush of new customers. Days after the tragedies in Baton Rouge, Minneapolis and Dallas, more than 350 people opened accounts at Unity. Such a surge was monumental for a bank that previously had roughly 4,100 accounts. Unity’s president and CEO greeted customers in a packed lobby and pledged to reinvest in the community. The U.S. has 23 Black-owned banks, credit unions or savings & loan associations.

Sandra Bland’s family reached a $1.9 million settlement in a wrongful death lawsuit against Waller County, several county employees and former Texas Department of Public Safety trooper Brian Encinia, who arrested Bland during a traffic stop in in July, 2015.  Bland, 28, was found dead in her jail cell three days after she was pulled over. Her death, which was ruled a suicide, prompted protests and made national headlines. With one major legal battle behind them, Bland’s survivors, along with jail reform advocates, promised to take their fight for change to the political and legislative arena.