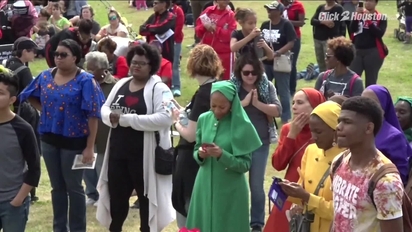 “Black women standing together and strong.”

That was one of the messages at Saturday’s March For Black Women Houston.

Houstonians gathered at the Emancipation Park for the rally sponsored by Black Lives Matter and Houston Rising. The group said it’s goal was recognizing and supporting the contributions of black women, and celebrating Black womanhood across the diaspora.

More than 1,000 people were on hand to celebrate Black sisterhood and empowerment, advocate the importance of voting and share the message to trust Black women at Houston’s inaugural March for Black Women.

“People think marches are super political, but this march is more about celebrating the contributions of black women and the strengths they have in this community,” said Nisha Randle, co-founder of March for Black Women. “This march is not only political, but it’s social, mental health; it’s all encompassing of the experience of a Black woman.”

Shirts and posters with encouraging messages were seen throughout the sea of people of diverse ethnic and cultural backgrounds.

Randle and Kandice Webber, a Black Lives Matter Houston activist and registered nurse, noticed the lack of black women representation throughout communities.Last year, both women attended the March for Black Women in Washington, D.C., and they wanted to bring that experience home to Houston.

Organizers felt that the mainstream Women’s March did not include women of color. Webber and Randle wanted to change that.

Voting was a common thread throughout the rally. Una Topps, 75, said she felt inspired to participate.

“After the march, I hope everybody will get re-registered to vote and get out and vote for the right people,” she said.

Linda Tucci felt it was important to attend the March for Black Women. Even though she is not black, Tucci and her friends recognized the importance of supporting their counterparts, listening to their concerns and showing solidarity. Tucci wanted to make it clear that she and her friends were not the voices of the event, but simply supporters of the movement.

“Black women have felt potentially marginalized or not included in some of the women’s groups that have been coming together,” Tucci said. “After the walk, I would hope that we would continue to see activism on all levels representing underrepresented groups, which include people of color, transgender people, and all groups. I think that Houston is such a diverse city, and we need to make sure that opportunities are available to all members of our community.”

“Looking into the crowd, I felt loved and a sisterly bond. I saw committed women who took their time to come out to be with other African-American women of similar backgrounds, but with the same history,” Jackson Lee said. “It’s the power of women and the power of black women who uniquely can touch communities who are troubled and in need. Black women can be change makers. They already are, but I want them to know how much they can be change makers.”

To commemorate the event, Lauren Butler, an artist who goes by L Janelle, painted a picture of Barbara Jordan, the first African-American congresswoman from the Deep South.

“I wanted to serve her justice, and I wanted to capture her spirit, boldness, and strength,” Butler said. “It’s important to have events like this because it shows the diversity within black women, and it’s important to showcase a group that is often silenced. It’s important to lift them up, build them up, and hear what they have to say from a first hand perspective.”

The painting can be found in Texas Southern University’s library, where the march concluded. Organizers now plan to connect organizations throughout various communities that aim to address social and justice issues.

“This march was the celebration of the unique place black women have in this country. The march was a place where black women could meet and celebrate each other,” Randle said. “We want to encourage black women to be more physically engaged in their neighborhoods, to actually take that power amongst themselves, and be proactive in being a part of politics and civic engagement.” 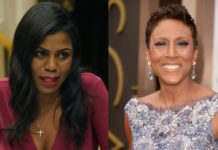