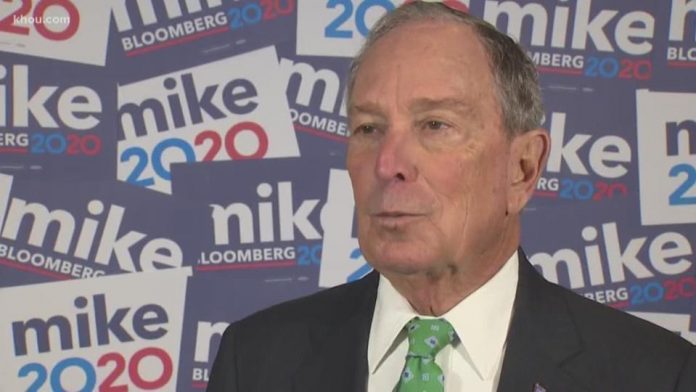 Last night’s Texas House District 28 election brought Democrats back down to earth in Texas, but 2020 presidential candidate Michael Bloomberg says too much shouldn’t be read into one local election.

As far as he’s concerned, Texas is still very much in play. It’s why he’s been to the state several times this primary season.

“It’s great to be back here in Houston,” Bloomberg said.

“I’m running to bring an end to Trump’s con game and to start putting things back together to bring us all together,” Bloomberg said.

His visit to Houston comes on the heels of a bad night for Democrats. Republicans celebrated a big win last night when Gary Gates defeated Dr. Eliz Markowitz by 16 points in the race for District 28.

Big names like Joe Biden, Elizabeth Warren and Michael Bloomberg went all in on this race hoping it would turn blue.

“Look if she’d have won, they would have to switch 8 seats instead of 9, so it makes it a touch harder,” Bloomberg said.

It didn’t turn blue and pundits say it could be a sign of Republican strength in Texas in 2020. Bloomberg doesn’t buy it.

“These races are so local,” Bloomberg said. “I don’t think you can read too much into what happens in one tiny district and think it matters in others.”

Bloomberg said Democrats have to continue to campaign everywhere including Texas.

“The last war said, the lesson of it was that there’s only six states that matter,” Bloomberg said. “That’s not true for the next election. All 50 states or almost all 50 states are in play.”

The Bloomberg campaign is focused on Super Tuesday when the majority of delegates will be award for the Democratic primary. He plans to spend a lot more time in Texas between now and Election Day.

Tomorrow on DefenderNetwork.com: ‘Black & Bloomberg,’ an exclusive Defender interview with Democratic presidential hopeful Michael Bloomberg on his “Black Agenda” and why Blacks should give him their votes.