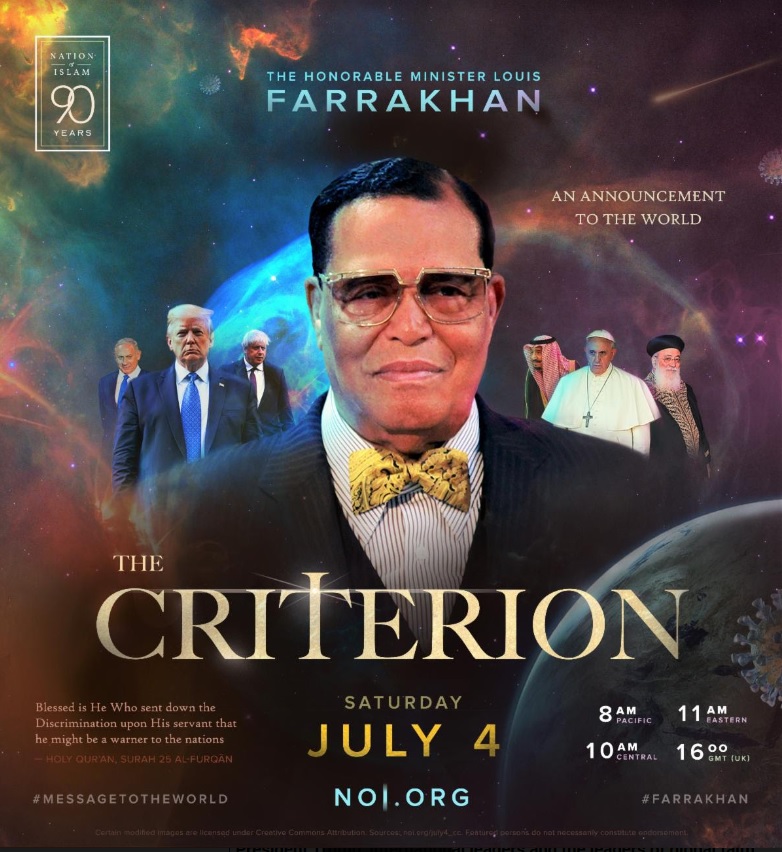 The Honorable Minister Louis Farrakhan of the Nation of Islam will deliver a major message July 4 concerning the current state of affairs in America, the world, the coronavirus global pandemic and other critical subjects.

Minister Farrakhan’s message, “The Criterion,” will be delivered on Independence Day, which also marks the 90th anniversary of the existence of the Nation of Islam in America. It will be his first public address since February.

His critical guidance and divine warning are of particular importance for President Trump, international leaders and the leaders of global faith communities. The world has entered a final period of divine reckoning, and a coming famine, said Minister Farrakhan.

“The judgment is not approaching; it is present,” he warned.

His message, Saturday, July 4, will be available at www.noi.org and Final Call Radio via www.finalcall.com. The message will air at 11 a.m. EDT, 10 a.m. CDT, 8 a.m. PDT, and at 16:00 Greenwich Mean Time for the United Kingdom, Europe and international audiences.

“I say to you with deep humility from the 25th Surah of the Qur’an: ‘Blessed is He Who sent down the Discrimination upon His servant that he might be a warner to the nations,’ ” the Minister added. The 25th Surah or Chapter of the Holy Qur’an is titled, “Al-Furqan” or “The Discrimination/The Criterion,” meaning to discern or distinguish truth from falsehood.

On July 4, 1930, Master Fard Muhammad-the teacher of the Hon. Elijah Muhammad, patriarch of the Nation of Islam-made himself known in North America. He fulfils prophecy and, as the Hon. Elijah Muhammad taught, represents the coming of God in Person, the Great Mahdi of the Muslims and the long-awaited Messiah of the Christians. Read more at www.noi.org.