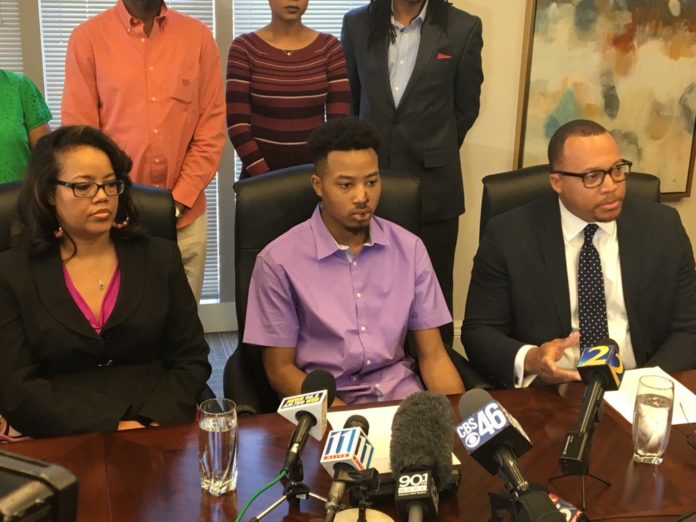 A 21-year-old man who was kicked and punched by Georgia police during a traffic stop last week has spoken out about the disturbing incident, saying this wasn’t the first time he had a run-in with one of the officers.

Demetrius Hollins had a visibly battered lip and nose when he talked with NBC News on Friday. He said he had tried to video Wednesday’s traffic stop after recognizing one of the Gwinnett County officers from a prior arrest. But before he could activate his phone, he was manhandled and forced out of his car.

But other motorists did capture parts of the incident on video.

In one video, Hollins is seen exiting his car with his hands in the air when the officer, identified as Sgt. Michael Bongiovanni, suddenly clocks him in the head. After delivering the blow, Hollins said Bongiovanni pulled out a Taser and used it on him.

The second video, taken by another driver, shows Hollins lying facedown on the ground in handcuffs. As Bongiovanni is holding him, Officer Robert McDonald runs up and appears to stomp on his face.

Asked if he’d seen the videos, Hollins said, “It’s actually very difficult. … Seeing that I’m getting manhandled, not just ― how could I say this? Assaulted.”

“What if that had happened to somebody else,” he asked, “if they was in my shoes?”

McDonald was the first officer to be fired, after the video of his actions appeared. Gwinnett County Police Chief Butch Ayers said that McDonald owned up to what he’d done. After the other video surfaced showing Bongiovanni’s role, he too was fired. Ayers said Bongiovanni expressed no remorse.

“He felt the force was justified,” Ayers told NBC News.

In the police report filed by the officers, Hollins was accused of refusing to exit his vehicle when asked. The report didn’t mention Bongiovanni’s use of physical force. Ayres said that omission amounted to lying.

Thanks to the cell phone videos, both officers are facing criminal charges. Meanwhile, the initial charges against Hollins ― which included obstruction of a law enforcement officer, driving without a license plate, not using a turn signal and carrying less than an ounce of marijuana ― have been dropped.

The police department said it is also dismissing 89 unrelated criminal cases in which Bongiovanni or McDonald was the principal officer or a necessary witness.

“The actions of these officers completely undermine their credibility and they cannot be relied upon as witnesses in any pending prosecution,” the police department stated in a release on Friday.