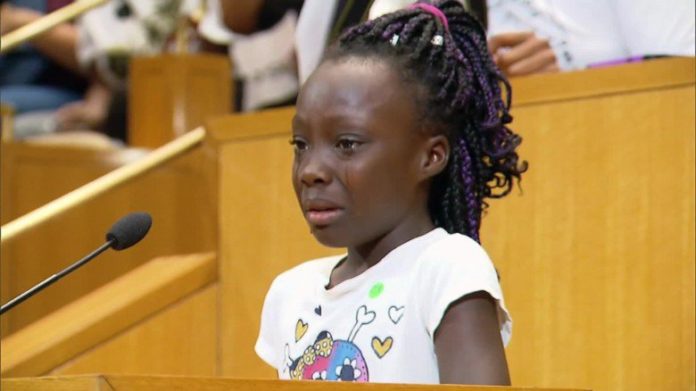 She may be small in size, but Zianna Oliphant had some powerful words for the Charlotte City Council on Monday night.

Oliphant’s emotional testimony came during a tense city council meeting – the first since a Charlotte-Mecklenburg police officer fatally shot 43-year-old Keith Scott, sparking mass protests throughout the city. The child’s words brought a number of attendees to tears, according to The Associated Press.

We do this because we need to and have rights.Zianna Oliphant

Scott, a black man, was killed on Sept. 20 while police were reportedly trying to deliver a warrant to a different person at the same apartment complex. The officers say they were leaving when they encountered Scott, who they claim was armed. Scott’s family insists he didn’t have a weapon and was reading a book.

A video taken by Scott’s wife, Rakeyia Scott, and released last week shows officers yelling at Scott to put down his gun, while she responds that her husband doesn’t have one and has just taken medication for a traumatic brain injury. Moments later, an officer opens fire.

Protests broke out for several days after the shooting, with demonstrators demanding that the city’s police chief release bodycam footage of the encounter. The demonstrations turned violent for two days last week, and one man was fatally shot amid the chaos.

Order was mostly restored over the weekend after the Charlotte-Mecklenburg Police Department released some footage of the shooting. But at Monday’s city hall meeting, emotions ran high and many residents criticized how city officials had handled the incident.

Some people also brought their children to the meeting.

“We are black people and we shouldn’t have to feel like this,” said Oliphant, who had to stand on a stool to see over the lectern. “We shouldn’t have to protest because y’all are treating us wrong. We do this because we need to and have rights.”